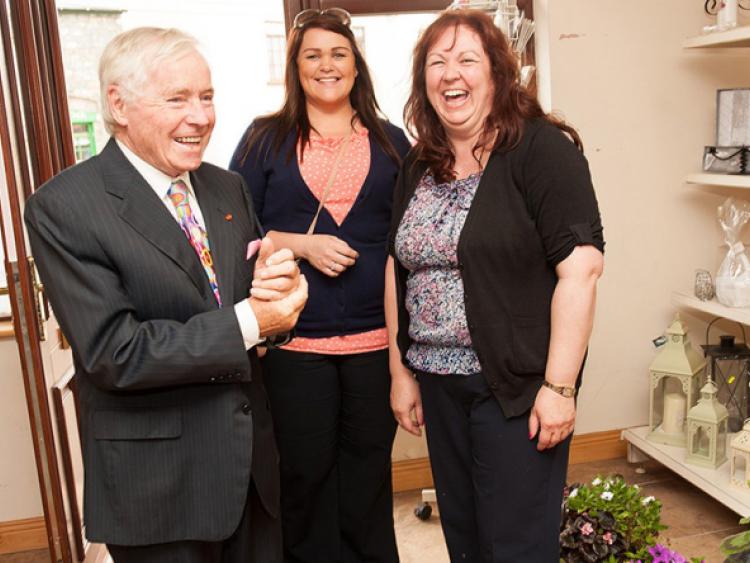 Business guru Senator Feargal Quinn has advised Mountmellick traders to make the most of heavy traffic that flows through the town.

Business guru Senator Feargal Quinn has advised Mountmellick traders to make the most of heavy traffic that flows through the town.

“You have plenty of parking. We can make Mountmellick a place where everybody wants to shop,” he said, suggesting extra flowers and roadsigns.

“This is the only road from Rosslare to Galway, the secret is to entice drivers to stop,” agreed Sen John Whelan, who had arranged the visit at the request of Cllr Lisa Delaney, a keen supporter of Mountmellick’s business community.

Founder of SuperQuinn, Senator Quinn, 77, is now almost better known for his RTE show Feargal Quinn’s Retail Therapy, where he doles out advice to shops.

He called into most shops from Emmett Street to the Community Arts Centre, heartily welcomed by the traders, many whom have been in business for several generations.

Baker Ger Philips told the Senator that he let his part-time worker go when SuperValu opened at the far end of the town.

“It took a lot of business, but we’ll survive,” he said.

Yvonne’s Florist also moved out of the square, to Emmett Street after the main supermarket moved.

Butchers Martin and Dermot Morris are 51 years in business.

“We do some ready-to-cook meats, but there is a low footfall so we have to be careful, but I don’t see SuperValu as a competitor,” said Martin.

Mrs Dowling from the butchers on O’Moore Street, in business for 91 years, told him her grandson Eoghan O’Neill was taking over the business, which had been set to close.

Senator Quinn then gave a talk in the Balcony Theatre, noting the town had no hotel, but a rich history ideal for tourism.

“It’s been a joy to come here. I have seen what a vibrant town it is possible for Mountmellick to be. There are a whole lot of little things we can do to help make it a destination. I will look to the challenge over the next few days,” he said.

Cllr Delaney was delighted with the turnout.

“Mountmellick was alive with people and traffic, It will be interesting to get Feargal’s view. Once we have his report we will meet and see what improvements we need to make,” she said.