Laois man is the rising star of green energy in Ireland 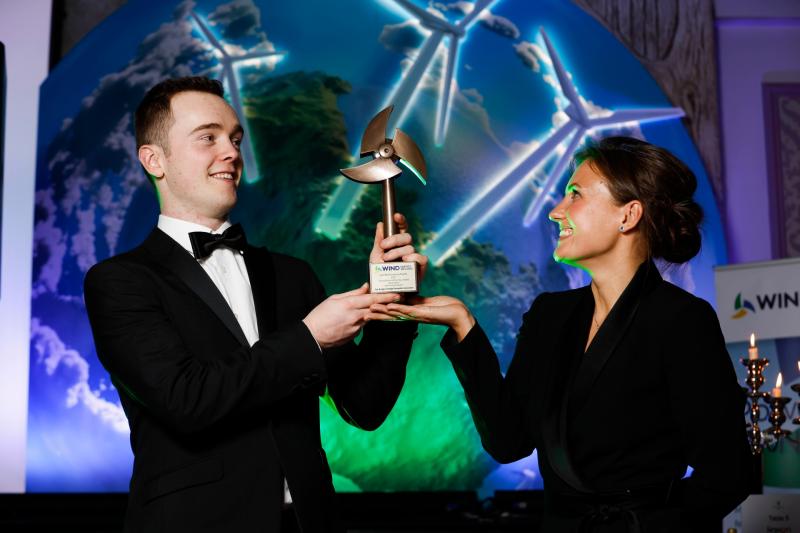 A Laois man has won a top award at a national event organised to recognise the achievements of the rising stars in the rapidly growing wind energy sector.

Cian Brogan (25) from Emo has won the Young Person of the Year Award at the Irish Wind Industry Awards on Friday 11 March in Clontarf Castle.

The award, which was open to people aged 30 and under, celebrates the achievements and leadership of the next generation of Ireland’s largest renewable energy industry.

On the night Cian was described as ‘providing strong leadership for the industry not only in his work but also in his advocacy role for the next generation’.

His employers, Energia, who nominated him for the award, described him as having a strong passion for innovation and having quickly progressed in his own career. He is also an advocate for other younger graduates and manages graduate engineers in the company as well as presenting at university open days to promote wind energy and its career opportunities.

Cian Brogan is clearly happy to be working in the industry.

“I graduated college three years ago and started with Energia. My pathway into renewables has been very interesting and I’ve been given a vast amount of opportunity in the industry because it is so new and developing and growing in Ireland. It’s only at the start of where it can be, of where it can grow to. There’s a lot of jobs available there for young people to get into the industry,” he said.

Laois town in line to get dedicated street cleaning machine

Cian is a past pupil of Mountmellick Community School in Laois. He attended Dublin City University. He played football for Emo GAA and Emo Celtic.

Wind Energy Ireland (WEI) is the representative body for the Irish wind industry, working to promote wind energy as an essential, economical and environmentally friendly part of the country’s low-carbon energy future.

As Ireland’s largest renewable energy organisation, WEI has more than 150 members who have come together to plan, build, operate and support the development of the country’s chief renewable energy resource.