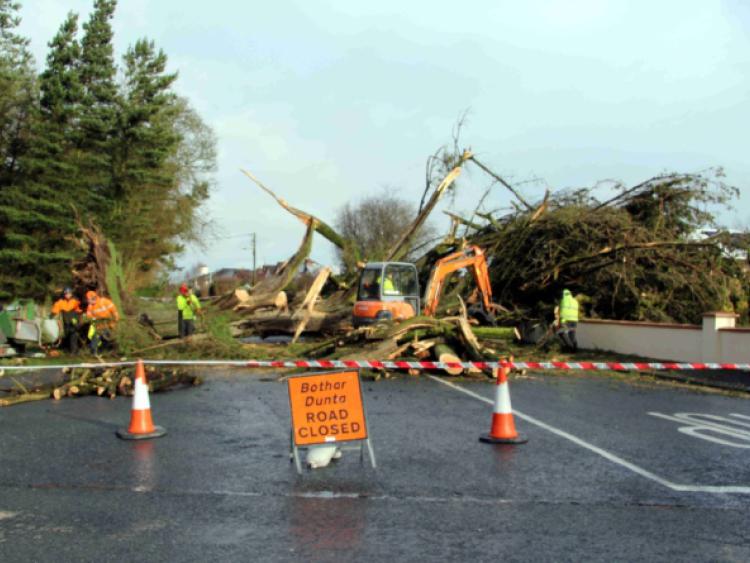 Laois authorities say their Major Emergency Plan was not activated last Wednesday afternoon, because crews were in control of the situation.

Laois authorities say their Major Emergency Plan was not activated last Wednesday afternoon, because crews were in control of the situation.

‘Storm Darwin’ was the worst storm to hit Laois in years, uprooting hundreds of trees around Laois, with many trees falling across roads and cutting power supplies.

High winds and rain hit Laois at 3pm on February 13, during a busy school run time.

Two trees fell onto passing cars, the first a massive tree on the Block road in Portlaoise that fell on a car with a family of five inside. The other on a country road in Rathdowney involving a lady driver. No one was injured.

Branches also fell on to a fire truck while it was attending an incident.

Roofs were whipped off two sheds and landed on sections of the N80, blocking it.

Two lorries overturned on the motorway near Borris-in-Ossory.

Rivers were at risk of flooding in Mountrath and Mountmellick.

There were 46 emergency 999 calls made during the storm, with up to 30 other incidents reported or discovered.

The decision not to declare a Major Emergency status was made by top officials from Laois’ Gardaí, Fire Service, HSE and county council, at a meeting during the storm.

“We immediately mobilized all our fire crews, all our outdoor staff and all available Civil Defence crews. We had between 140 & 150 personnel on the ground from 1500hrs until late Wednesday night,” Mr Kehoe said.

All 999 calls were managed from Portlaoise Fire Station.

“This allowed for a co-ordinated logging and close-out of all incidents reported on a real-time basis. I would like to thank staff for fabulous work in dangerous conditions,” he said.

All road blockages were cleared by Wednesday night, apart from the tree on the Block Road in Portlaoise, an access road to the hospital.

“Following liaison with the HSE and AGS it was considered safer to leave the tree as was due to the stormy conditions, since full hospital access was available from another route. This was removed by Thursday at 4pm,” he said.