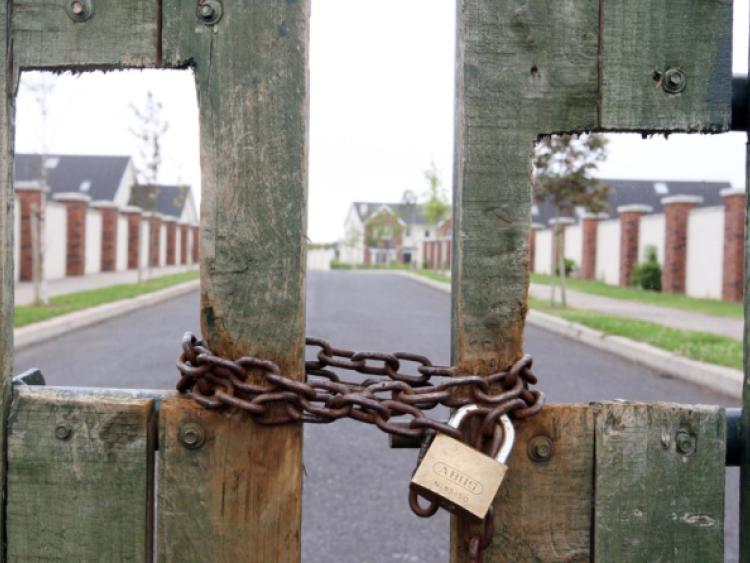 Described as “an attractive unfinished estate” , one of Laois’ biggest ghost estates is up for sale after being padlocked shut for the past six years.

Described as “an attractive unfinished estate” , one of Laois’ biggest ghost estates is up for sale after being padlocked shut for the past six years.

Fruithill Manor in Graiguecullen beside Carlow town, was planned as one of the biggest estates in Laois.

With the property crash, work was suspended in 2008 and the estate entrance was padlocked shut, with just 38 houses finished and another 38 partially finished.

Receivers have now placed the majority of the Fruithill site on the market for €1,25m.

Roofs were recently fixed and houses boarded up.

Planning permission has expired but much of the land is zoned residential.

Laois County Council are believed to have expressed interest in acquiring 16 acres of unzoned lands to enable the continuation of the Carlow Relief Road and for the widening of the Springhill Road.

The property has road frontage to the R430 Castlecomer Road and the Springhill Road, and is beside the N80.

Auctioneers Lisney describe it as “an attractive unfinished housing estate situated only fifteen minues walk from Carlow town centre. The property has good road frontage which offer a number of potential access routes from the R430 Abeyleix to Castlecomer Road to facilitate the completion of the development, subject to planning permission,” they say.

Speaking in 2010, Charlie Flanagan TD, now Minister for Foreign Affairs, said Fruithill Manor was “a blight on the environment in our county”.