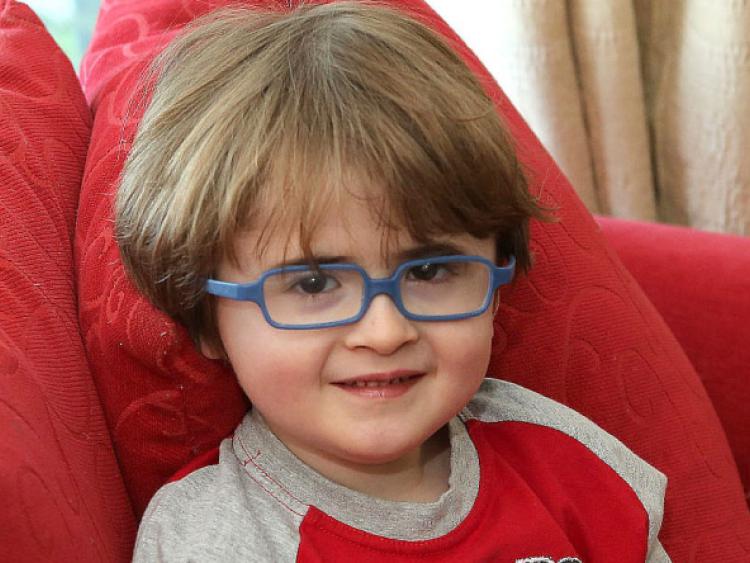 A Portarlington family are busy fundraising to get a service dog for their six-year-old son, Aidan, who has an ultra rare genetic syndrome.

A Portarlington family are busy fundraising to get a service dog for their six-year-old son, Aidan, who has an ultra rare genetic syndrome.

Following years of persistance from his parents, Aidan was last year diagnosed with Kleefstra Syndrome. Kleefstra syndrome is a rare genetic condition in which a tiny piece is missing from near the end of one of the body’s 46 chromosomes. Aidan is one of only 300 people in the world with this.

His parents Fran and Rebecca now feel that Aidan needs a service dog to keep him safe.

“Aidan has no sense of danger, so he could just run off if we’re out or bolt when you take him out of the car,” Rebecca explained. “We hope that the dog will be his pal, be his ears and hear for him, to help him become independent without sensory overload in new situations and hopefully be an alert dog for seizures. The dog will act as an anchor to stop Aidan from running away, the dog will also be trained to track Aidan if he goes missing.

“Aidan can hug and rub the dog to get his sensory input that our own small dog is too small to provide. Aidan will be able to walk independently with the dog, no more daddy holding onto him tightly.”

“The dog can alert us if Aidan is opening the hall door or maybe trying to get the knives in the kitchen, it’s just going to make such a difference to our life,” Fran explained.

With the first instalment on the new puppy of €1,500 due this month, so the puppy can begin training, the family have set up a donations page on the Go Fund Me website called Aidan’s Buddy A service Dog for Aidan.

The family are already overwhelmed by the public’s response to their appeal, which has raised almost €1,000 in the first two weeks.

“The amount of the likes, shares and donations has blown us away,” Rebecca said.

“We decided to call the page Aidan’s Buddy A service Dog for Aidan as he can say “Aidan Buddy” himself. So that won our vote.”

In total, the service dog will cost just over €6,000, but the family are confident that it will make a big different to Aidan’s life and be worth every penny.

Aidan’s extended family have also come on board with the fundraising, and his nanny is prepared to go to the most extreme lengths to ensure her grandson hits his target.

“Aidan’s nanny Collette Manning has volunteered to jump out of an aeroplane in the Irish Parachute Club in Clonbullogue. This is very out of her comfort zone but what better way to embrace the twilight years of her life.”

“This will be the start of A ‘50 Ways to Kill Aidan’s Nanny” theme of events, starting with the parachute Jump in late June.”

The family also plan to do a car boot sale in Laois in May and another Car Boot in June in Tullamore.

From very early on, Aidan’s parents Fran and Rebecca knew something wasn’t right with him, they were referred to the early intervention services.

“Aidan’s development was delayed at six months he would lie on the floor and lift his bum up, but he didn’t crawl, he wasn’t babbling, he had no words. We knew something wasn’t right but we had to fight to get him assessed,” Rebecca explained.

In late 2013, a genetics test showed up something small and Rebecca and Fran were asked for samples to further investigate this.

“In February of last year, we were told Aidan had Kleefstra syndrome. The doctor didn’t know much about it, but we were told to contact Unique a UK based support group for rare chromosomes disorders.”

Aidan, who has three other siblings, has a moderate intellectual disability, severe language delay, he is non verbal, he has hearing loss in both ears, he wears hearing aids, he has some autistic tendencies and many other physical and behavioural issues.

“Aidan was five before he said mama or dada. He has been inconsistently passing and failing hearing tests, but when he went to get grommels, the doctor said he had small ear canals so he now wears hearing aids.

Fran continues: “He has a very high pain threshold, when he was just three he cut his head and had stitches with just a local anasthetic. There is lots of little things like that.”

Despite everything, Aidan is a very happy boy and loves to take part in all the fun as best he can.

“We don’t treat him any differently than his older brother and sister,” Fran explained.

The family have already began to prepare for the new member of their family.

Their own dog is currently being trained with Service Dogs Europe in the hope that he will work well with the new dog and the family won’t have to rehome him.

“We sent our little dog Star off to do some obedience training with Service Dogs Europe so as we can keep her with the Service Puppy and she can be a good role model for the puppy,” Rebecca said.

“The kids were really upset to see her go, hopefully this is the hardest part of the journey.”

Rebecca added: “We have had such a amazing response from our family, friends and the wider community to Aidans cause. I suppose it’s the kindness, good will and intentions from everyone that is a wonderful surprise.”

“We never have fundraised before and we are naturally nervous about the task we have taken on especially in the present times when peoples financial resources can be under considerable strain. But now we are very hopefully we will achieve the target.”

You can also make a donation online at gofundme.ie and search for Aidan’s Buddy Service Dog for Aidan.

“Just to note any cheques would have to be addressed to either Rebecca Manning re Aidan Byrne or to Francis Byrne re Aidan Byrne, otherwise they can not be lodged/cashed,” Rebecca explained.