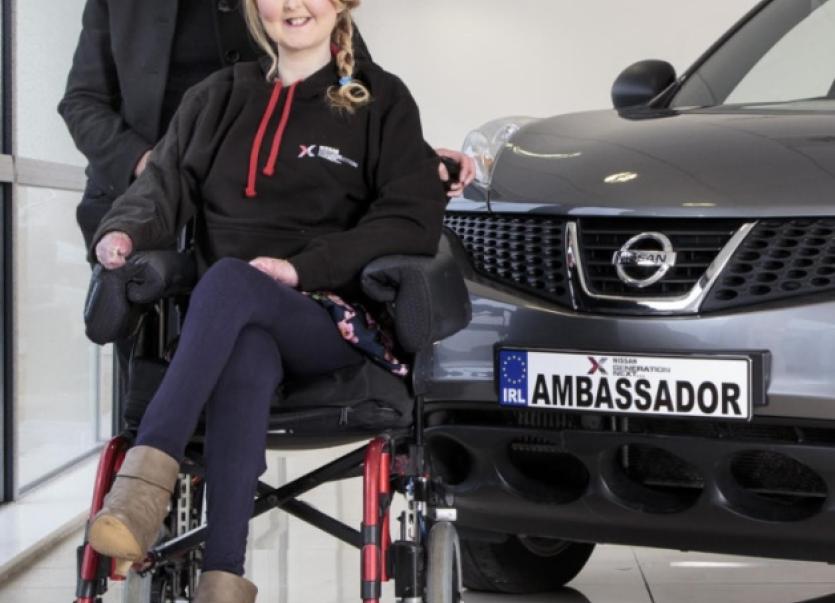 Abbeyleix woman Emma Fogarty is playing an inspirational role in encouraging Ireland’s next generation of leaders on the local, national and international stage to follow their dreams.

Abbeyleix woman Emma Fogarty is playing an inspirational role in encouraging Ireland’s next generation of leaders on the local, national and international stage to follow their dreams.

Emma, who suffers from a rare skin blistering condition, travelled to Dublin last week with her mother Patricia to launch the 2015 Nissan Generation Next programme.

Emma was chosen as one of ten Nissan Generation Next ambassadors for 2014 in recognition of her outstanding work as a Debra Ireland Patient Ambassador and her determination to pursue her dream of learning how to drive.

Emma took just five months to learn how to drive in a specially adapted Nissan Micra before becoming the first and oldest woman in Ireland living with EB – a painful, debilitating condition that makes her skin as fragile as a butterfly’s wing – to pass her driving test.

“Driving has given me huge indepence. I have been in a wheelchair for five years so my independence was limited. Being able to drive here and there when I want to has made a huge difference to my life. I followed my dream and I am encouraging others to so the same,” she added.

Emma won a Person of the Year award in 2010 For her extraordinary campaigning work and determination to raise awareness of EB in the face of huge personal struggle.

Despite being in constant pain, she completed her Leaving Certificate, and left home to study in Limerick for three years. She workedin Dublin for three years and is now the Patient Ambassador with Debra Ireland.