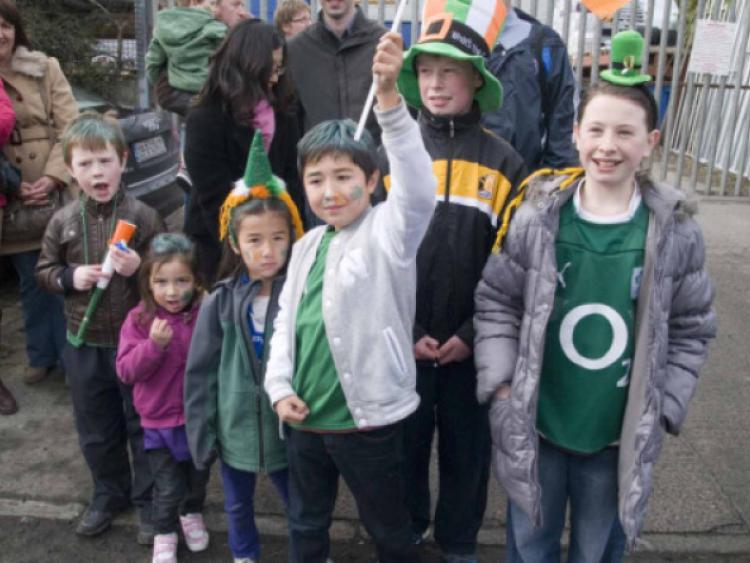 THE crowds in Durrow were lucky for this year’s St Patrick’s Day parade as the sun shone down for hundreds of people who lined the village streets.

THE crowds in Durrow were lucky for this year’s St Patrick’s Day parade as the sun shone down for hundreds of people who lined the village streets.

As always there was a festive atmosphere for the day, with a large number of stalls, as well as bouncy castles and games for children. There was lots of colour and character to this year’s parade, which was motorised. Raheen Vintage Club gave a good display of their wares, as did the Woodenbridge Paddlers, who dressed for the elements.

The Harps juvenile team were also full of colour decked out in their yellow and red, the young sports people chanted their club’s call as they travelled through. The Durrow Scouts gave a fine display and were dressed up as Native American Indians going to war, with brightly coloured head dresses and war paint.

The Happy Days Creche also had a very imaginative float with Noah’s Ark, and lots of animals peaking out it. As well as animals in the ark, there were plenty of very convincing animals walking behind it. Spotted were a few species of bears, tigers, crocodiles and cows to name but a few.

Tommy Kenna Butchers were dressed in their finery as well, and there was another colourful display from Charlie and the Chocolate Factory group who had lots of help from their oompa loompas.

The Durrow parade also had a visit from the Pope with a display from the Durrow Bygones Museum.

The Abbeyleix High Nellies Club braved the bitter cold for the day and there was another cyclist in the form of an old style police officer, who represented Dunmore Community Alert.

Ryan’s Daybreak in Durrow participated, as did members of www.laoisweather.com, who told the crowds, “we don’t just talk about the weather, we measure it”.

There were plenty of diverse sports groups involved this year, including the Cullahill Handball Club and the Laois Kayak and Canoe Club who formed last year.

In the midst of the fun, there was a more serious note to one of the floats. Made with a miniature landscape of Laois on the back of a trailer, the float read “will Pat Rabbitte’s turbines be Bugs Bunny’s worst nightmare?”

The parade was a great success with a large attendance in spite of the bitterly cold weather.