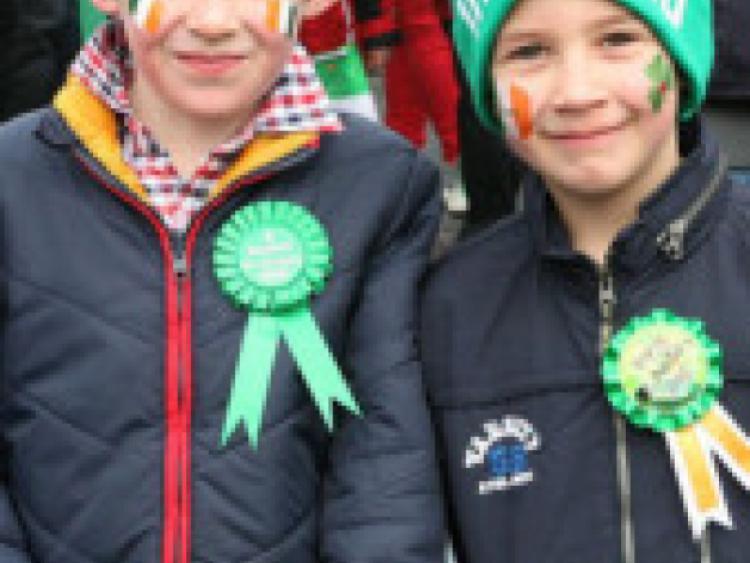 As the crowds huddled along the streets and under the canopy in Stradbally, taking shelter from the cold, the annual St Patrick’s Day parade made it ways through to the town to the church for Mass.

As the crowds huddled along the streets and under the canopy in Stradbally, taking shelter from the cold, the annual St Patrick’s Day parade made it ways through to the town to the church for Mass.

The rain had just cleared when shortly after 11am, members of the Civil Defence led the parade from the Abbeyleix Road, followed closely by a steam engine billowing dark smoke into the cold morning air.

Hundreds of people lined both sides of the street from the start of the parade all the way down to the Church, as small children excitedly waved tricolours, faces painted in the same green, white and gold.

St Colman’s National School marching band provided the music proudly displaying their drumming and tin whistle skills. They were supported by the junior members of the school, dressed in their high vis vests were hard to miss as they displayed their walking bus.

A2Z Montessori, the adult choir, Stradbally Prayer Group and the flower and garden group all processed through the name. Along with the younger members of the GAA club proudly wearing their club jerseys.

The local soccer club, youth club and social services all followed closely on their way to mass, while St Patrick arrived in a trailer behind a vintage tractor flanked by Shetland ponies.

The parish vintage club were well represented, as were the Ratheniska CCE marching band and the Bugle School of Irish Dance, beautifully dressed in their bright pink uniforms.

Laois Vintage Cars, local business’, motorbikes, tractors all brought up the end of the parade. Portlaoise Credit Union’s fairy princess waved her magic wand through the bublles, while the sirens from the bright red engines from the local fire service signalled the end of the parade as people made their way to the church for 11.30am mass.