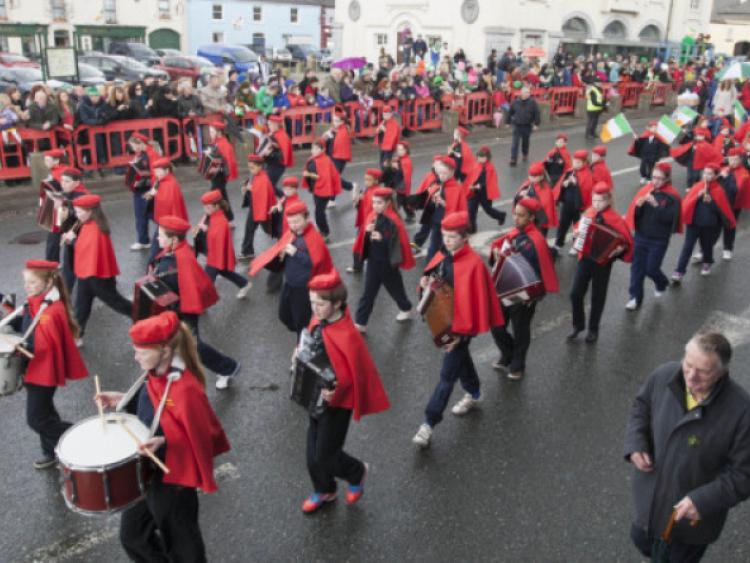 Scattered showers did little to keep the crowds away from the Abbeyleix St Patrick’s Day Parade, which was revived last year.

Scattered showers did little to keep the crowds away from the Abbeyleix St Patrick’s Day Parade, which was revived last year.

There was a definite festival atmosphere on a bright, crisp, St Patrick’s Day morning. Music could be heard all the way down at the bottom of the town where people mingled through craft and food stalls.

Just at 12.30pm, the time the parade was due to get underway, the brollies came up as a short rain shower and even hail passed over. The crowds packed around the library, and up and down both sides of the historic street to see the parade make its way through the town.

The Ballyroan Brass Band began with the Wearing of the Green and finished with the national anthem to signal the beginning of the parade, led by Lt Thompson along with Sgts Brophy and Fennelly. Piper, Cormac Bowell travelled home to Abbeyleix from Chester to lead the parade.

Always a popular feature in any parade, the bright red fire engines of the Abbeyleix Fire Service stirred lots of excitement in the younger spectators.

Students from Scoil Mhuire National School added some colour and imagination to the parade as they stressed the importance of story and rhyme. Their costumes were made with the help of the Abbeyleix women’s group, according to the MC. The Juvenile Soccer Club were represented by members singing ‘Ole, Ole, Ole.’

While the Shanahoe NS band, with members from junior infants to 6th class brought some life to the middle of the parade. The band, were formed in 1991, played ‘Ireland’s Call.’

One of the biggest cheers of the afternoon came for the Acorn Special Olympics Club, whose members proudly bore the medals and ribbons they have won for badminton, table tennis and equestrian.

The Active Retirement were closely followed by the only snake in the parade, who headed straight for the dignatries on the viewing stand. Made by members of Youth Together who made the snake from recyclable material such as old sheets, chicken wire and paper.

The parade paused momentarily, as Stanley led the crowd in the Harlem Shake from a cherry picker in front of the library. John Joe Fennelly, Tom De Vesci and Fr Aherne all tried their best to perform the You Tube hit on the viewing stand, but might need to watch the video a few more times to get the moves.

Marty Rohan and the friends of Abbeyleix District Hospital were ‘on a voyage’ with Marty dressed as a ship’s captain, at the helm, hopeful that they are sailing into calmer waters and the future of the hospital will be secured soon.

Local business’ such as Laois Blinds, Demense Furniture Showrooms, Super Valu, G’s Gourmet Jams, the many montessori schools in the area and Clelands all supported the local parade.