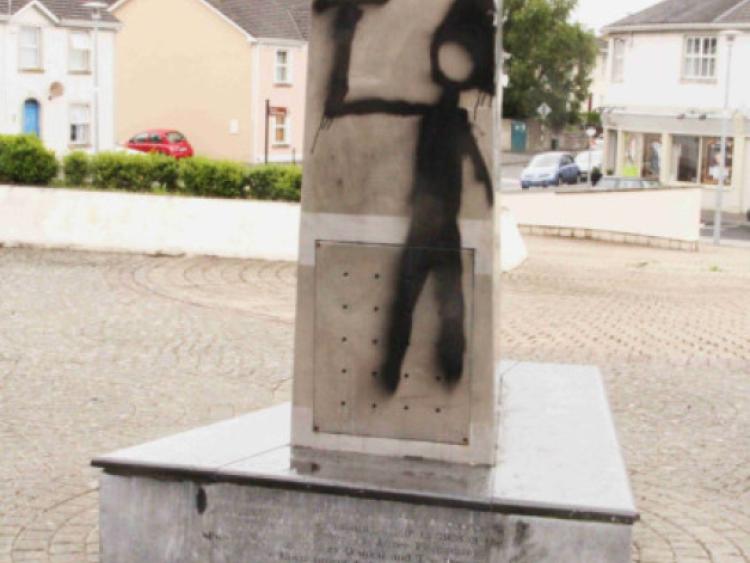 A memorial dedicated to an aviation legend from Portlaoise was sprayed with paint recently, but hopes are high of catching the culprits.

A memorial dedicated to an aviation legend from Portlaoise was sprayed with paint recently, but hopes are high of catching the culprits.

The youths vandalised the steel sculpture to Commander James FitzMaurice in Fitzmaurice Place, while crowds attended the official opening of Laois’ UN veterans headquarters took place close by, at about 3.30pm.

A person attending that ceremony had the foresight to record a video of the vandals while they spray painted a large black stick figure on the side of the monument.

The crime was immediately reported to Portlaoise Gardaí, who arrived to the scene and are believed to have bagged a can of spray paint found to add to their evidence.

“We have very good information and are very hopeful of bringing this investigation to a successful conclusion in due course, ” said Sgt Michael Tarpey.

UN Veteran Mick Thompson from Post 27, is concerned that vandals may turn their attentions to the War Memorial and their UN memorial, both at Mill View nearby.

“Our memorial cost a lot of money, which was fundraised through local donations, so we would be concerned about that. We only noticed what had happened as we were taking down our marquee, and saw the Gardaí at the scene,” he said.

The steel sculpture echoing the shape of the wing of a plane is a memorial to Commander James Fitzmaurice, who co-piloted the Bremen, the first aeroplane to fly the North Atlantic from east to west, in 1928.

Fitzmaurice was a former student of the Christian Brothers in Portlaoise, and is believed to have found his interest in aviation through the Aldritt family, Portlaoise motor dealers who constructed Ireland’s first aeroplane, now on permanent display in an English museum.

Fitzmaurice Place, a paved amphitheatre close to the cinema, has been previously targeted by graffitti vandals, and was cleaned up by the local Tidy Towns group in 2011.