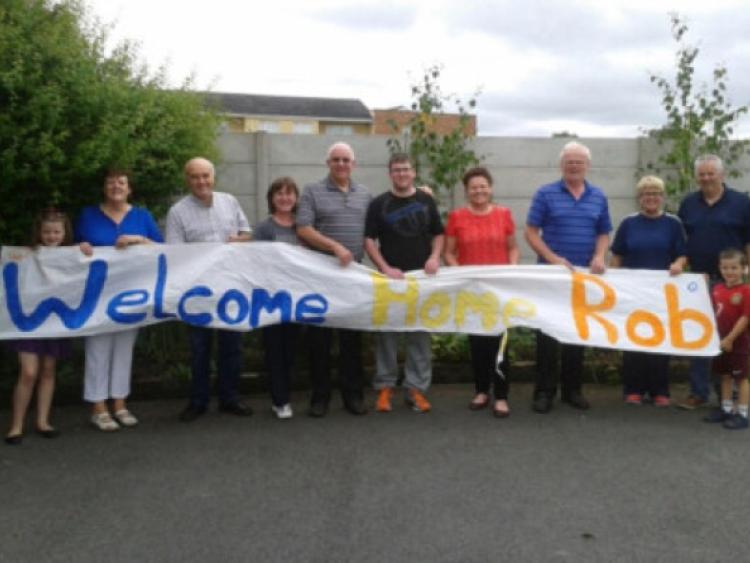 It was an emotional scene in Dublin airport yesterday when Robert Dempsey arrived home in a wheelchair from Australia.

It was an emotional scene in Dublin airport yesterday when Robert Dempsey arrived home in a wheelchair from Australia.

Electrician Robert, aged 24 from Mountmellick, moved to Perth last year for work, but suffered a major brain injury when he fell from his motorbike last April.

With intense rehabilitation, he progressed from initially being in an induced coma, to taking his first steps unaided last Saturday July 12.

It was the same day that over 70 supporters climbed Croagh Patrick to raise money for his flight home.

“Robert sent a video of his first steps on his own and I showed everyone, it gave us that extra bit of encouragement to push on. We were amazed with the turnout,” said his sister Aoife, one of the climbers.

Conditions were wet, windy and not without accident.

“One of our climbers David O’Meara slipped on a rock and went running out of control down the mountain, he was stopped by a guy from our group, but he dislocated his hip, and was airlifted off. He was in Mayo hospital for two days,” she said.

The day was otherwise a success, with sponsorship money still returning. It will go towards Robert’s ongoing rehabilitation as well as the costly flights home, businessclass for his comfort.

The family were told last Wednesday that Robert was well enough to fly.

“He will rest at home for a week and then Beaumont will assess him to decide if he can continue rehabilitation as an outpatient,” said Aoife, who with younger sister Roisín had anxiously awaited his return home.

Robert was accompanied by his parents Paul and Dolores, who left their jobs to stay with him for the past few months. He is in good form.

“He is getting much stronger. He is still unsteady, and his speech is slurred but his personality is starting to come out, he always was a bit of a character. We are so glad he is alive, but we were afraid that we wouldn’t get that back,” said Aoife.