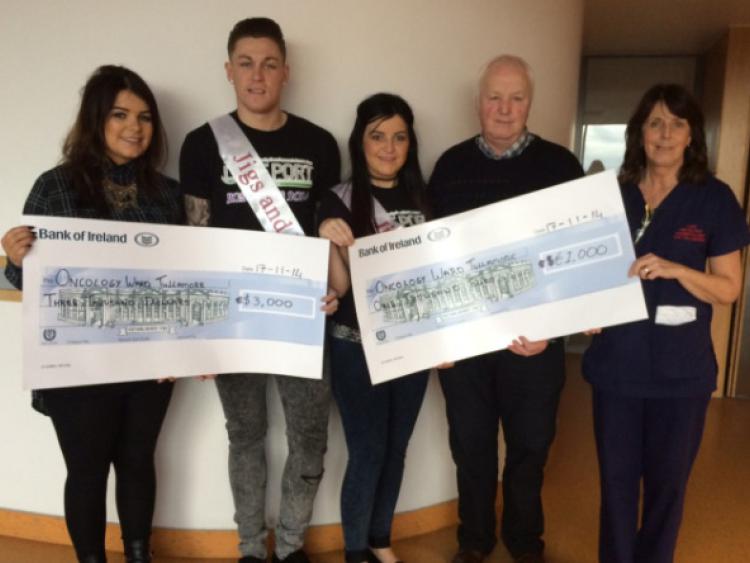 The winners of Port’s Jigs & Reels dance competition presented their charity prize recently to the Oncology unit in Tullamore hospital.

The winners of Port’s Jigs & Reels dance competition presented their charity prize recently to the Oncology unit in Tullamore hospital.

Shona Mooney had danced with her boyfriend Stuart Mulpeter in memory of her mother Eileen Mooney, who passed away from cancer.

“Mam was in and out of the oncology unit since March, in for weeks and home for a few days, they were always so kind and loving and caring, they made it a bit easier for us,” said Shona.

Eileen battled against cancer from the age of 44 and passed away at the age of 51, in the care of family and staff in the hospital last July.

Shona and Stuart began their Irish dancing training in October with Kara Burbage, to try and raise money for the unit in Eileen’s memory.

They were thrilled to be announced as winners at the gala charity night in the Heritage Killenard, organised by Portarlington Community Development Association.

It was an emotional night.

“It was hard, even to talk at the end of the night,” she said.

Their prizes were two charity donations, one for €1,000 from the PCDA and the second for $3,000 from a surprise donor Meg McCauley, who happened to be staying in the hotel and after attending the dance competition, donated €50,000 to the PCDA.

Shona thanks the PCDA and all who supported her, as well as Tullamore hospital staff for their care of her mother.

Eileen is sadly missed by her husband John and three children Shane, Shona and Sabrina.