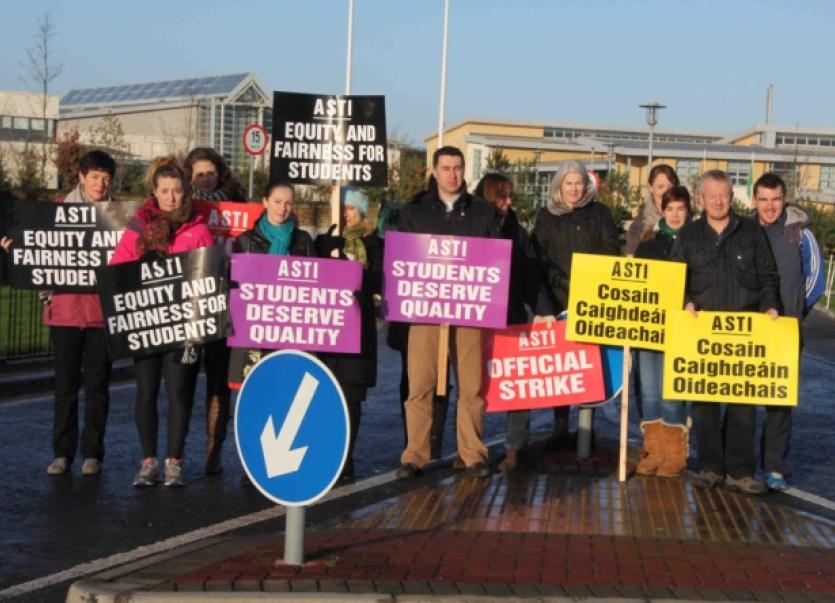 Thousands of Laois students were stayed home last week while 446 teachers striked against a government plan to make them mark their own students’ Junior Certs.

Thousands of Laois students were stayed home last week while 446 teachers striked against a government plan to make them mark their own students’ Junior Certs.

At Portlaoise College there were beeps of support for the six teachers on the beat.

“Parents walking by are wishing us luck. Most realise this isn’t about us, it’s about students, I think it’s only three times in the last ten years we striked and they were about pay and conditions, this isn’t,” said teacher Linda Bergin.

The new system would “throw the baby out with the bathwater” she said.

“Plenty of the new curriculum is really positive, but we don’t believe we should mark our own students. It should be externally marked, that way it’s fair and transparent. An A in Dublin is the same as an A in Portlaoise,” said Ms Bergin, equality officer for Laois TUI.

She agreed that a day’s valuable education was being sacrificed.

“Sometimes you have to look at the bigger picture, students often miss days for fairs or matches, they are all valuable and this is no less so for their future,” said Ms Bergin, who said teachers are taking a day’s cut for the strike.

Marching outside Scoil Chriost Rí, ASTI school stewart Jenna McGee said teachers could end up pressurised to give higher marks if self assessment goes ahead.

“Parents will feel a certain grade should be given to their child, we going to feel a huge pressure to do that,” she said.

There would be also be concerns about favouritsm.

“Parents would have a fear that you would favour one child over another, one child who works hard all year and didn’t work hard on the day. That’s something we are worried about as well, particularly if you are living and working in the locality, you could feel that pressure,” Ms McGee said.

She says the government plan was purely to cut costs.

“Minister Ruairi Quinn decided this was a way of saving money and he forgot about the implications. We didn’t want to be out here, it’s the last straw it was the only thing we could do, we’ve had talks, they didn’t work,” she said.

Another strike is planned for January.

“Hopefully we can go back and talk to Minister O’Sullivan and she will see the reasons we have for doing this are valid,” said Ms McGee.