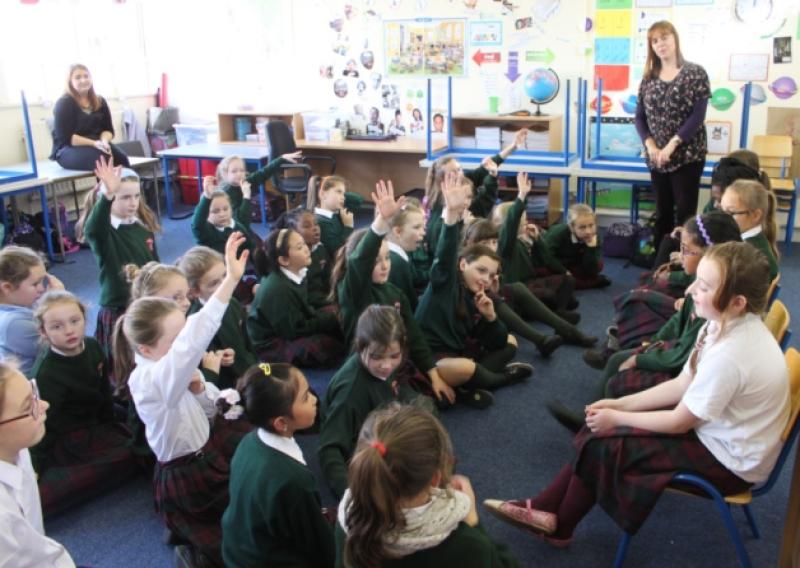 Sacred Heart Portlaoise’s third class girls have made history come alive in their classroom, by transforming into 9th century clans.

Sacred Heart Portlaoise’s third class girls have made history come alive in their classroom, by transforming into 9th century clans.

The primary school is the only one in the midlands taking part in a new Arts in Education project, where an artist comes to work with the class and their teacher on a project combining the arts with other subjects.

Artist Joanna Parkes from Dublin is working with teacher Jenny Buggie, on a history project based around the Rock of Dunamaise, Laois’ most famous landmark.

Ms Buggie is delighted with how the class have responded.

“It’s just brilliant, Joanna comes up with the story and i tie it in. The girls came up with the ideas themselves, I was hugely impressed with their creativity and enthusiasm, it sparked their imagination and they want to delve more deeply into it now,” she said.

Their project centres around what life was like for people living and working 1,200 years ago.

“They learned what a ninth century fort looks like, and formed family groups of farmers, weavers and potters. They play drama games, improvising and developing their characters. It fits the need of the curriculum, bringing in other areas of learning like art, english, geography and history,” Ms Buggie said.

On the walls and windowsills of the class is evidence of their artwork, with intricate jewellery, pottery and a 3D fort, under the banner of Museum of Laois.

The girls have become little experts in 9th century history.

“The children love it, they get so much out of it and really understand it,” she said.

The girls first had to ‘discover’ their lost treasures.

“They imagined they were archeologists finding objects in drama and made those objects in art. What they don’t know yet is at the end the clan leader will die, and they will put all the objects into the grave with him, as burials were such important rituals back then,” Ms Buggie said.

The Arts in Education project is one of six across Ireland.

“There are hopes it might be a model to deliver arts education into all primary schools,” added Ms Buggie.