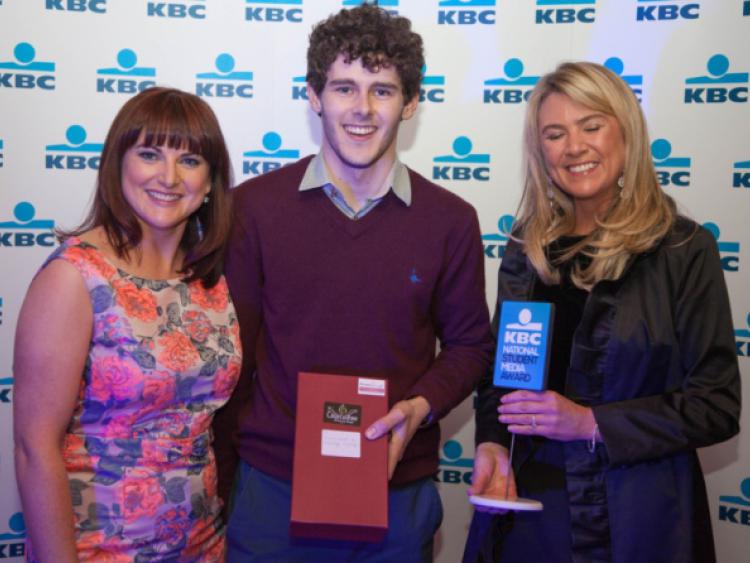 Trinity student and Portlaoise native, Benn Hogan has won a top media award for his monthly column in the universtity paper as gaeilge.

Trinity student and Portlaoise native, Benn Hogan has won a top media award for his monthly column in the universtity paper as gaeilge.

Benn won the award for Journalist Of The Year-Irish (Iriseoireacht Scríofa) at a star studded event for the The 15th KBC National Student Media Awards (the Smedias), in the Aviva stadiuim on Thursday, April 16.

He was was presented his award on the night by Eimear Ní Chonaola, lead news anchor from TG4.

“I really was not expecting it. I write for the University Times and we were encouraged to enter the competition.”

Ben submit a portfolio of the Irish Column he writes on a monthly basis for the paper.

From the Dublin Road in Portlaoise, Benn is the only son of Kieran and Mary Hogan and has one younger sister, Eada who is a student in Scoil Críost Rí.

He claims his love of the Irish Language began with a first year trip to the gaeltacht, where he attended Colaiste Lurgan.

Benn was part of the infamous cover of Avicii’s ‘Wake Me Up’, which was a hit on social media and seen the students, including Benn perform on the Late Late Show.

“I’ve been back to the Gaeltacht as a cinnire and a cuntoir and I live on a Irish Language scheme here in college. I’m a mentor on the scheme this year and I’m also part of the Irish Language society,” Benn explained.

“I’ve always liked Irish, it’s a very different experience when your speaking it to learning it in school.”

Benn is currently finishing his second year in Law and Business in Trinity College. He plans to travel to Australia in July as part of a college exchange programme.

“It’s a college wide exchange and I’ll be studying in the University of Queensland in Brisbane for the next year. We will have a good bit of time off over Christmas, as it is the Australian’s summer holiday so I hope to be able to travel around a bit.”