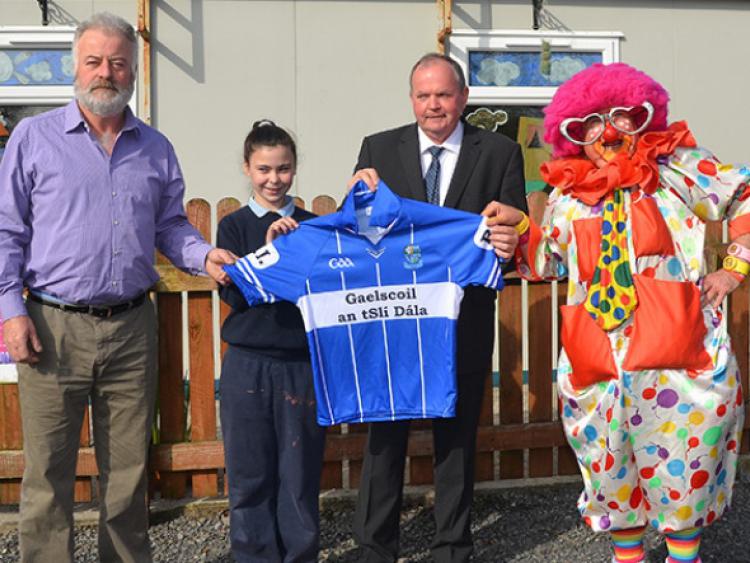 An inter-schools sports day marked a big weekend end for weekend for Gaelscoil an tSlí Dála in Ballaghmore.

An inter-schools sports day marked a big weekend end for weekend for Gaelscoil an tSlí Dála in Ballaghmore.

The school which is located on the Laois border near Roscrea, were proud hosts of a weekend of activities for the 2015 Conradh Árd Fheis in the Rackett Hall.

Gaelscoileanna from Portlaoise, Trumera and Nenagh all visited on Friday, April 10 in Ballaghmore for an action packed day of hurling, football, rounders and chess.

Giggles the clown entertained younger pupils from Trumera and Ballaghmore, while throughout the day members of Conradh na Gaeilge and Gaelscoileanna enjoyed workshops.

Friday also featured a touching tribute to the late Seamus Costello, a former member of the schools’ board of management.

On Saturday a sponsored walk took place in the sunshine from Rackett hall to the round tower, with proceeds to Gaelscoil an tSlí Dála.

That evening Conradh na Gaeilge hosted a dinner and the pupils entertained with a Scoraíocht, receiving a standing ovation for their performance. A ceilí followed, and Irish traditional music could be heard throughout the Rackett Hall until the early hours of Sunday.

The busy weekend concluded with a Mass in St Molua’s church Ballaghmore on Sunday celebrated by Fr Corbett.

New GAA jerseys were also presented by Roscrea Diesel Injection to the school.