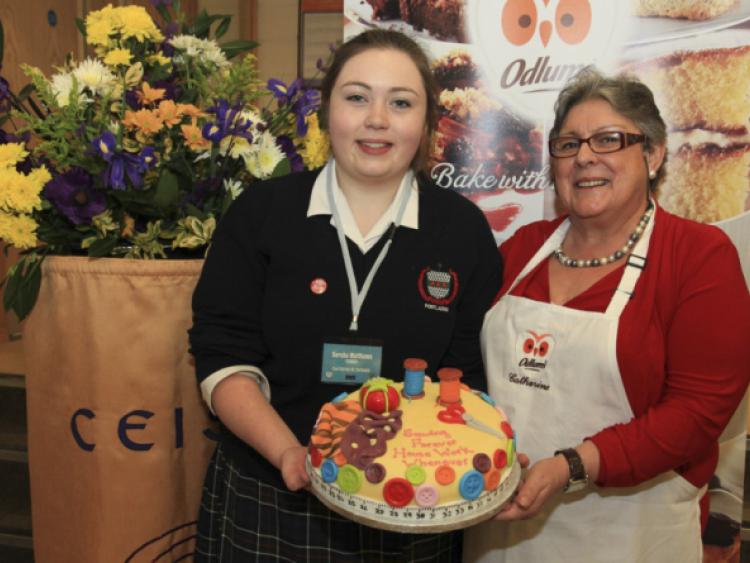 The tasty baking skills of Emo girl Sorcha Mathews, a student at Scoil Chríost Rí in Portlaoise, have won her the title of Odlums All-Ireland CEIST School Bake-Off champion.

The tasty baking skills of Emo girl Sorcha Mathews, a student at Scoil Chríost Rí in Portlaoise, have won her the title of Odlums All-Ireland CEIST School Bake-Off champion.

The transition year student joined six other finalist from across Ireland last month in the final at Árdscoil naTríonóide, Athy, to ‘bake it out’ for the top spot, with three hours to prepare, bake and decorate a cake.

The theme was talent and Sorcha found inspiration in her love of sewing, titling her lemon cake ‘Sewing forever, housework whenever”.

“I decided to make some sewing and embroidery tools, like a measuring tape, buttons, pin cushion, scissors, fabric and thread. A lot of planning went into it. I had to design the cake, choose the amount of layers and the size, and very importantly, the flavour,” she said.

She was thrilled to win.

“I didnt have my hopes up too high because the other girls had made some pretty amazing cakes. I was very pleasantly surprised to find out I had won,” said Sorcha, who was presented with a €150 voucher along with her title.

Sorcha began to bake as a tot beside her mother Eimear, a baker and caterer.

“I have always loved baking because of her. She taught me how to bake at a very young age and I used the first recipe she ever taught me for the cake in the competition, a basic vanilla cake, except instead of vanilla I added lemon rind,” said Sorcha.

She picked up decorating tips from tv programmes like ‘Cake Boss’.

“When I was younger all I wanted to be was a cake decorator and make ten tiered wedding cakes, but now I’m steering towards an artistic path. I want to do something along the lines of filmography or sculpting, but I will always be making cakes on the side,” she said, thanking her parents, home economics teacher Ms Mackie, principal Ms O’Donnell and Sister Evelyn for their support.

The CEIST All-Ireland Bake Off competition, with lead sponsor Odlums, aims to encourage baking and creativity, and forge links between schools and communities, The judge was Odlums celebrity baker Catherine Leyden.