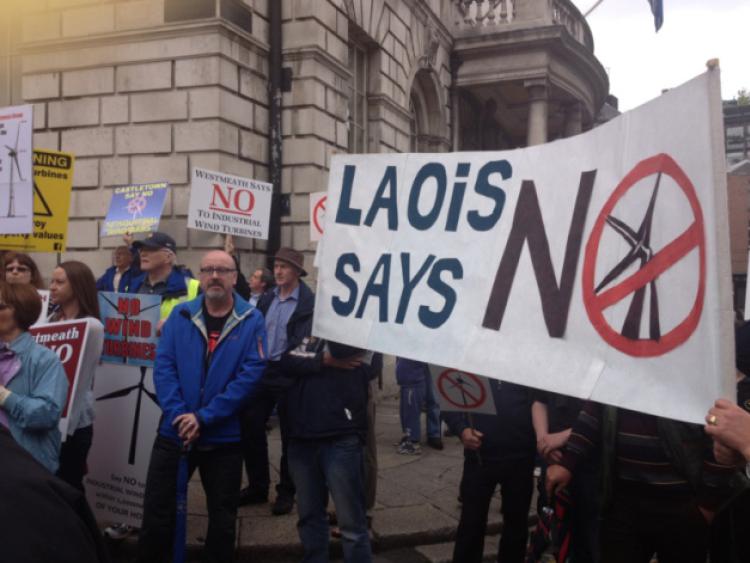 Minister Alan Kelly is to be tackled on unfulfilled promises over windfarm guidelines, by a Laois action group at the Ploughing Championships.

Minister Alan Kelly is to be tackled on unfulfilled promises over windfarm guidelines, by a Laois action group at the Ploughing Championships.

“It is very important that we don’t let them go away thinking everything is rosy. The new wind guidelines have been buried, but people of Portlaoise are blissfully unaware there is a big windfarm planned beside the town,” said Henry Fingleton from Cullenagh based group People Over Wind.

Groups from Laois and the midlands are planning a “short protest to send a strong message” at 11am on Wednesday September 23, at the Labour party tent. They are appealing to Laois people at the ploughing to join in.

“The longest consultation period ever (now 27 months), has been designed to allow as many wind applications as possible to get through,” claims People Over Wind.

The group put their concerns to Minister for the Environment Alan Kelly a year ago.

“He promised that guidelines would be published within weeks, and again last April. We are reliably informed that they have been stalled, following lobbying from businesses,” Mr Fingleton said.

A revision of the outdated 2006 windfarm guidelines was begun by the Department of the Environment in December 2013. It was scheduled for release last autumn.

The Department stated last July that it will be completed “as soon as possible”.

Meanwhile communities around Cullenagh mountain near Ballyroan are being urged to attend the High Court on September 28 and 29, so support an appeal against Coillte’s planned 18 turbine wind farm on the mountain.

“We are hoping to get a crowd in, we believe putting a human face to the legal arguments may help as it did so before. We think we have a strong case, and the new appeals court has good, experienced judges,” Mr Fingleton said.