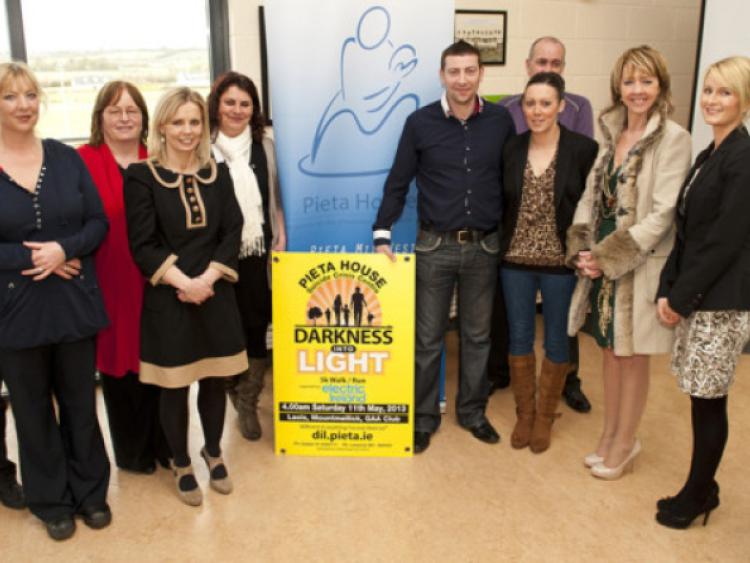 Mountmellick is one of twenty nationwide locations for the Darkness into Light walk/run on Saturday May 11.

Mountmellick is one of twenty nationwide locations for the Darkness into Light walk/run on Saturday May 11.

It is the second year for John and Susan Nelson to bring the event to Laois, helped by a enthusiastic volunteer committee. Last year they raised almost €9,000 for Pieta House, who provide free professional individual counselling to people in suicidal crisis.

“It was fantastic, we were hoping to get 100 people walking, but we had about 300, we even ran out of t-shirts,” said John, thanking the GAA club, SuperValu and Civil Defence for their ongoing support.

They hope for an even better response this year, urging all of Laois to register now for the dawn walk, which symbolises the journey out of the darkness of depression.

It was launched last Thursday in Mountmellick GAA club by founder and CEO of Pieta House Joan Freeman. She admired the trays of goodies baked by students from Mountmellick Community School.

“This is a perfect example of your community spirit. I am always so amazed how a community can get together, driven by passion and the need to make things different, and driven by sadness, because we all know someone who has died by suicide,” she said.

“They are an astounding couple, they have brought recognition of Pieta to Mountmellick, and the rest of the community have reached out to support them,” she said.

Catherine O’Dwyer from Electric Ireland said they were proud to support Pieta House since it began in 2006.

“We will be encouraging as many people as possible to enter Darkness into Light this year,” she promised.

Speaking to the Leinster Express, Joan said events have ‘snowballed’ in the past year.

“We have four centres in Dublin and one in Limerick. We will open another four this year, in Galway, Cork and Kerry, and in Tipperary this week,” she said.

Annual running costs are now €2,5 million, of which 90 per cent must come from fundraising.

Unfortunately the recession has increased demand for counselling.

“Research shows suicide rates go up in a recession. The highest rate is for men, but twice as many women attempt suicide. Self harm is mostly younger people, it is their way of communicating their distress,” she said.

Getting help is a simple process.

“Anyone can ring up and make an appointment. They are assigned to a therapist and can be seen twice a week. We are open seven days a week and we support their families too,” she said.

The 5km walk/run sets off at 4am from a candlelit Mountmellick GAA Centre (Acragar road opposite graveyard), looping around the town, and arriving back at sunrise, for refreshments and to sign a ‘banner of hope’ in memory of those lost to suicide.

To register now and claim a t-shirt, see dil.pieta.ie or collect a form from local shops, the Credit Union or the Leinster Express office in Portlaoise.