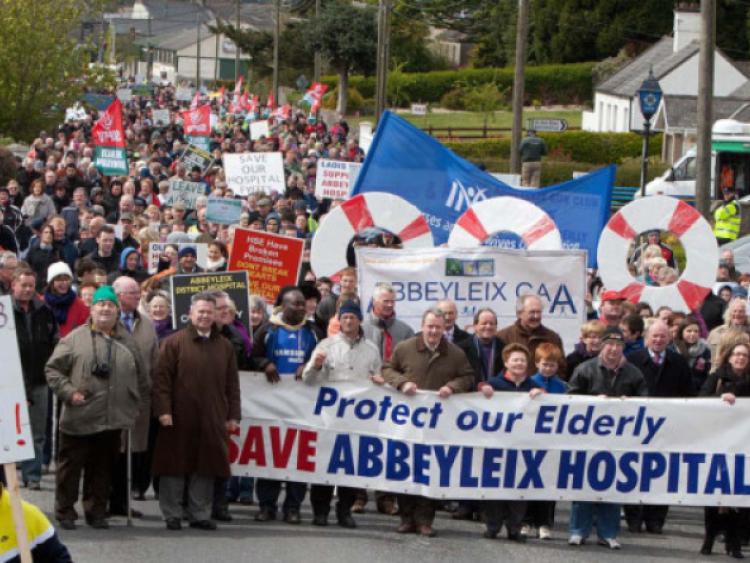 The Abbeyleix Hospital Action Committee are threatening to create anger among the people of Laois to pressure the Minister for Health into making a decision on the future of the hospital.

The Abbeyleix Hospital Action Committee are threatening to create anger among the people of Laois to pressure the Minister for Health into making a decision on the future of the hospital.

They have accused local TD Charlie Flanagan and Minister James O’Reilly of fobbing them off on why a decision has not been made.

Spokesperson for the committee, Gary O’Keefe said they had been patient for long enough and have now organised a public meeting which will take place in the Abbeyleix Manor Hotel next Monday night at 8pm.

“This has gone on to far, we ave listened and been patient,” Mr O’Keefe said, “We are being fobbed off and it’s unfair. They made their decision easy enough on day one, and had we not marched we would not be where we are today,” he said.

In November 2011, the HSE announced their plans to shut the doors of the community nursing home. At the time, the HSE claimed that the capacity to deliver a safe service for residents is not possible due to cuts in funding.

Following the annoucnement, more than a thousand people attended a public meeting and put together an action committee who have worked tirelessly since to keep the hospital open.

They help their first protest march that same month and over 5,000 turned out in support of the hospital. Over 3,000 people attended a second march in April of last year.

The HSE then announced a 12 week consultation process on the future of care of the elderly in the Midlands.

The consultation finished last September, but the Minister did not receive the report until January of this year.

Mr O’Keefe questioned what the stumbling block was in reaching a decision.

“The HSE’s reason of finances was thrown out, they couldn’t even give an answer to the Minister. They can’t justify it. The consultation process finished last September, the Minister has had the report for a while now, but yet they can’t tell us why they haven’t reached a decision yet. What is the stumbling block, all we want is practical politics.”

The Action Group Spokesperson said everytime they had held a major demonstration, something had happened.

“After our first meeting, the committee was formed. Then we had our first protest march and we got to meet with the Minister for Health after that. At the second march, the consultation process was announced.

“Our group is resilient and we are not going away. We want to create anger in the entire population. Over 5,000 people marched with us the last time, but that is not the whole county. We will put on massive pressure through to the people to make sure that the right decision is made.

Deputy Flanagan said his position was the same as reported in last week’s Leinster Express but he was surpised that a function of the action committee would be to create anger.

“I would rather expect that Gary O’Keefe and his group to help to achieve a solution to keep the hospital in place. That has been my key objective since the beginning of this campaign, and will continue to be my objective in the future.”

“I’m surprised at their intention, I don’t think it’s positive or helpful. I believe that the forging of a satisfactory resolution should be the objective.”

Deputy Flanagan said he was in almost daily contact with the Abbeyleix Hospital Action Committee, and would attend the public meeting next week, if he was available.