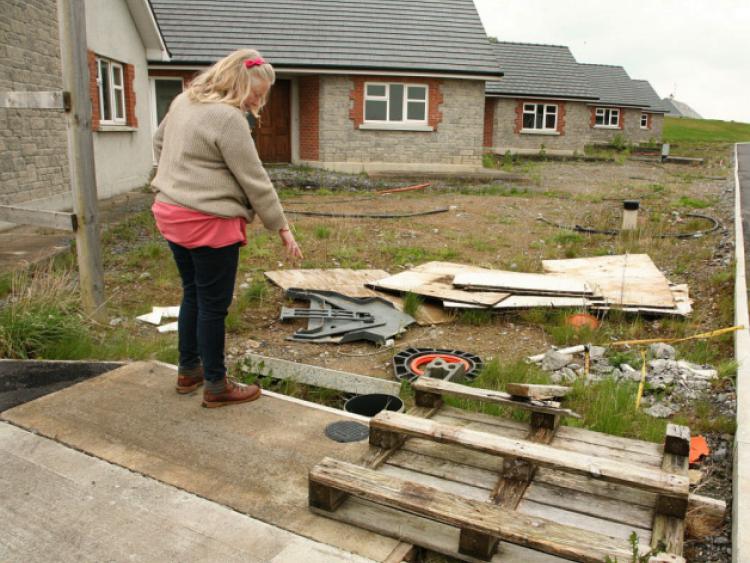 The council occupants of nine houses in a Stradbally ghost estate “should have a bit of patience” according to Cllr James Deegan.

The council occupants of nine houses in a Stradbally ghost estate “should have a bit of patience” according to Cllr James Deegan.

“This is an ongoing building site. I have worked with Pat Delaney and Jim O’Sullivan, they have plans to finish another nine houses, but they can’t apply surface dressing if heavy machinery is going to come in. There has been a bit of adverse publicity,” he said.

Last month residents of the retirement village told the Leinster Express they were “fed off with being fobbed off by the developer”, and were living with holes in the ground, piles of building materials, broken windows and no streetlights.

Cllr Deegan called for the first five houses to be taken in charge by the council at last Tuesday’s meeting. They are now council property, as are the next four houses. He was told this could not be done while the estate is the subject of enforcement proceedings.

“Once these matters are resolved to the satisfaction of Laois County Council, consideration can then be given to the taking in charge process,” said Carmel McNicholl, CEO.

Responding to Cllr Deegan’s claim that residents “didn’t have the wherewithal to cut grass or do maintainance”, engineer Orla Barrett said that the council do not cut grass in estates.

“In any housing estate we have taken in charge, we don’t cut grass, we only do so if it is causing a danger at junctions. The residents are going to form an association,” she said.

Cllr Tom Mulhall agreed that the nursing home looked well, and was a good local employer.

“I visit people there occasionally, but the patients are looking out on an unfinished estate. Work is taking place but I don’t know what volume, it is no harm for us to be putting on a bit of pressure,” he said.

He added that the lack of streetlights was a problem. He said the lights were not turned on.

“This is a matter of money, the people who built it didn’t do well out of it,” said Cllr Deegan.