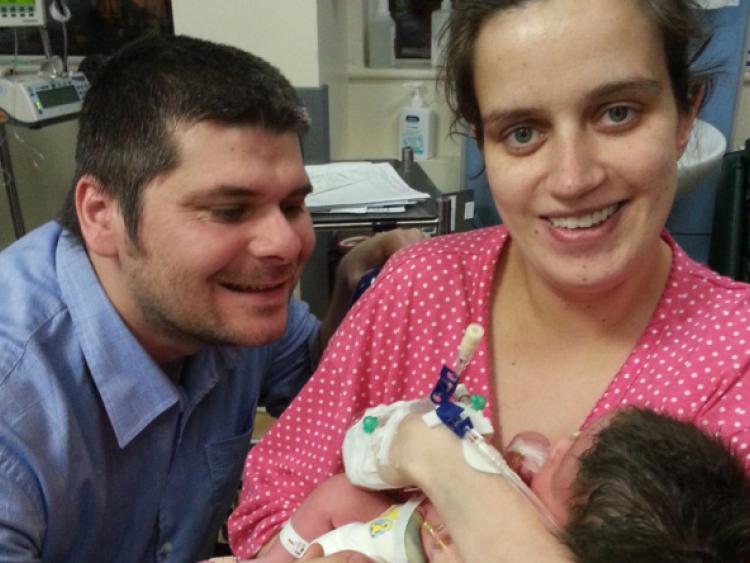 Support has flooded in for the family of sick baby Sam Mulhall from Portlaoise after an appeal from his family for help to cover the cost of seeing their child.

Support has flooded in for the family of sick baby Sam Mulhall from Portlaoise after an appeal from his family for help to cover the cost of seeing their child.

Sam is recovering from bowel surgery in Our Lady’s Hospital Crumlin, having been born ten weeks ago with life threatening bowel problems.

He could be a patient there possibly until his first birthday, and with travel costing as much as €700 a week for his parents Theresa and Shane from Esker Hills, they had appealed for public support, setting up a ‘gofundme’ account explaining their story.

They were snowed under with donations, which at time of writing amounted to almost €2,000, growing hourly.

Theresa, who visits Sam six days a week before rushing home to spend the night with his big brother Eli, aged 13 months, is overwhelmed.

“It’s been insane, it’s not just the donations, its offers to mind Eli, emails and messages of support, an offer of a free parking space from someone living near the hospital, people wanting to do a fundraiser night for us, even people recognising me in the shops,” she said, speaking to the Leinster Express on Sunday morning.

Sam’s recovery from his bowel reconnection surgery last week is painfully slow, with setbacks when the nurses tried to feed him tiny drops of milk.

“He is back on one ml of milk an hour. He has astounded us so far, maybe we were expecting too much too quickly. He is weaned off morphine which is great,” Theresa says.

“I do worry for his development, being in a bed with all his wires. The amazing thing is in the last week he is smiling constantly, and he is just ten weeks old,” she said.

The couple may need €5,000 to pay for travelling costs if Sam is in hospital for a year. They are donating extra money to the Ronald McDonald house.

Dance enthusiasts can support the Mulhall family this Saturday, February 1, at a ‘Zumba for Sam’ event in Mountmellick Macra Hall (behind the Golden Grill) from 5 to 6pm.

To keep up to date with Sam’s progress, and donate to the fund, see www.gofundme.com/679r2s