'Full steam ahead' on Laois special school after appeal withdrawn 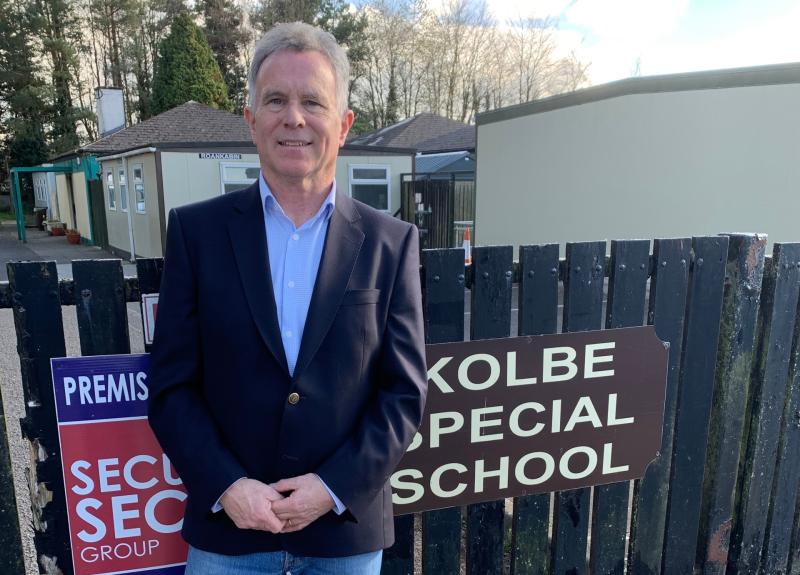 Minister Sean Fleming outside the Kolbe special school in Portlaoise

A planning appeal that was going to further delay a long awaited new special school in Laois has been withdrawn, with the project now "full steam ahead".

Kolbe Special School for severely disabled children in Portlaoise, was approved for a new building last month, but the school then lodged an appeal over one planning condition set by Laois County Council.

The condition relating to road access would have raised the project cost.

All is now straightened out, according to Sean Fleming TD, Minister of State in the Department of Finance.

"I am pleased to announce that it is full steam ahead for Kolbe School in Portlaoise.

"Plans are now proceeding immediately for the preparation of and drawing up of the tender documents so this project can go to tender and then to construction as quickly as possible.

"There had been a delay in this project as the school had lodged an appeal with An Bord Pleanála which has now been withdrawn.

"I had stated that a new Kolbe School for Portlaoise was my Number 1 priority during the last General Election campaign and I restated that on several occasions since," he said.

"Recently Laois County Council announced that they were granting planning permission for the new school, but the issue of an “adequate buffer zone to the western side of the site to provide access way and a roadline route from the Stradbally Road to the Dublin Road” had to be dealt with before the development could proceed.

"The school lodged an appeal with An Bord Pleanála in the event that an agreement would not be reached at local level.

"However I personally on a number of occasions spoke directly with Kolbe School Management, the Department of Education, the Minister for Education and senior officials in Laois County Council who were dealing with this in an effort to resolve the issue.

"I am pleased to confirm that following these discussions, and discussions between Laois County Council and the school authorities regarding revised proposals in relation to reducing the buffer zone that this matter is now fully resolved to the satisfaction of all concerned. The  new school project is now at tender preparation stage.

"Preparation of the tender documents had already commenced but was on hold while this matter was before An Bord Pleanála. This process is now resumed.

"In the interest of clarification, I wish to confirm that while I did deal with Kolbe School, the Department of Education and Laois County Council on this matter at no stage did I make contact with An Bord Pleanála.

"I am very pleased now that the appeal has been withdrawn and the Department of Education, Kolbe School and Laois County Council are fully satisfied with the outcome and this project can proceed as originally intended.

"I want to thank everyone involved for their constructive approach in bringing this matter to a speedy conclusion and I look forward to this project going out to tender as soon as possible.

"As always I am available to help all schools in the County in relation to proposed capital or other projects in their schools and I will assist in every way I can," the Minister of State said.

Kolbe is the only school for children with profound special needs in Laois, with 41 pupils but five of the seven classes are in prefabs. A new school has been on the Department of Education's list since 2001.

The new replacement school building will be on a greenfield site, set aside for many years beside the school on the Block Road. The single storey building will have 8 classrooms and ancillary accommodation including a General Purpose room, a Home Economics Room, a Daily Living Skills room, library and resource area.