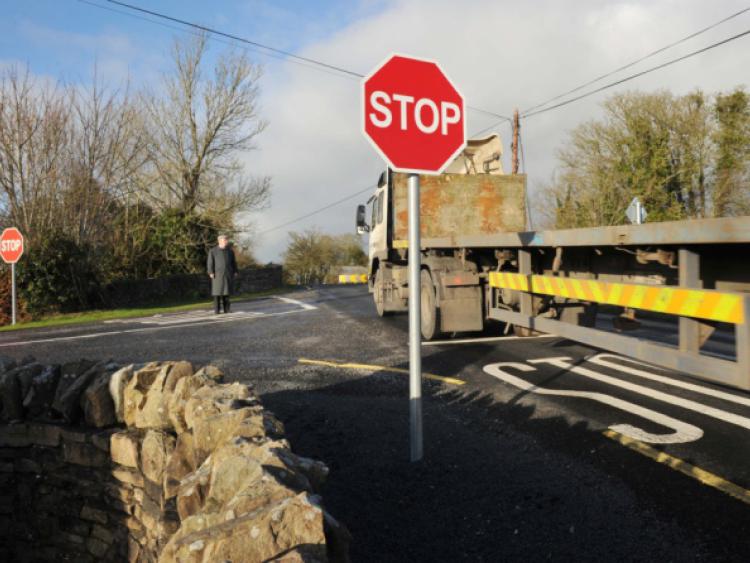 A crossroads that has no less than four stop signs is ‘confusing drivers on a regular basis’ say Gardaí, but the council are planning more for Laois.

A crossroads that has no less than four stop signs is ‘confusing drivers on a regular basis’ say Gardaí, but the council are planning more for Laois.

Last Thursday Chairman of the town council Paddy Bracken stood on Hickey’s Bridge and was concerned to see many drivers not stopping.

“About 50 percent of the cars did not heed the stop signs, they didn’t slow down, particularly those driving from the Cloonagh and Derrycloney directions. They still think they have the right of way. I am concerned there will be an accident,” he said.

The crossroads is on a hump backed bridge in Derrycloney, regularly used by drivers bypassing Mountmellick town centre.

The junction has poor visibility, and was the scene of several accidents in recent times.

Last autumn after consultation with local residents, Laois County Council installed the four stop signs to force all drivers to stop before proceeding if safe to do so.

However there has been a mixed reception from drivers.

At a recent policing meeting, Garda Sgt Ingrid Moore from Mountmellick admitted it will be difficult to apportion blame in a traffic accident.

She was questioned by Cllr Marc Connolly.

“It seems to be working, it does slow traffic. But from your point of view how does it work?” he asked.

“Good question. We have had a look. It causes confusion on a regular basis, a lot of hesitation. It won’t be simple. We haven’t noticed a problem, but confusion, yes,” said Sgt Moore.

Cllr Bracken asked if the Gardaí were happy with the junction. He agreed that it was causing confusion, while Cllr Stephen Lynch had a traditional technique for who would be at fault in a collision.

“Years ago, if you came to a crossroad and couldn’t see, you hadn’t the right of way until you got out, and had a look first,” he said.

“There’ll be a first test case if something happens,” he warned.

It is hoped that new rumble strips at Hickey’s Bridge, will further slow traffic, while Cllr Bracken has also suggested a light on the bridge for safety.

A review meeting between residents and the council should include Sgt Moore, suggests Cllr Bobby Delaney.

The council are considering more of the unusual junctions around Laois.

“The visibility is quite poor because of the bridge. There is very little we can do as the bridge cannot be removed. We believe the confusion will settle down, and that it is a success. The junction is not that widely used in Ireland, but it is in the United States,” said senior engineer PJ Dempsey.