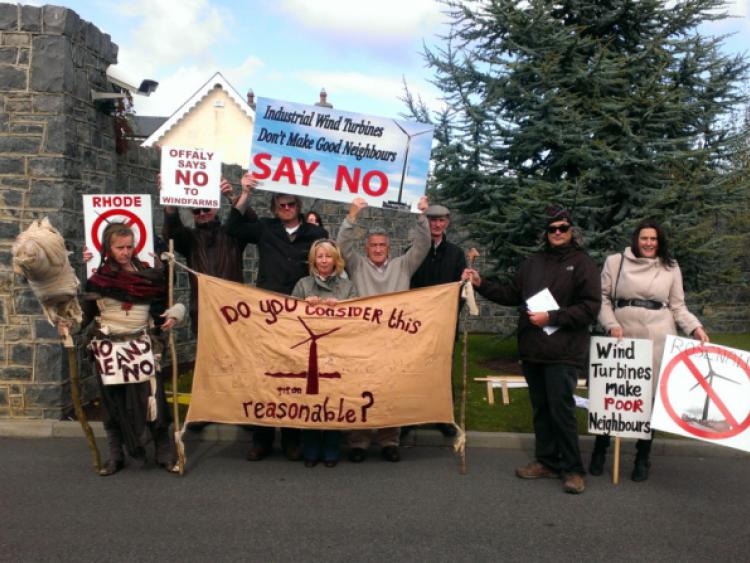 Laois county councillors unanimously backed a motion to block turbines in excess of half a megawatt being erected in Laois.

Laois county councillors unanimously backed a motion to block turbines in excess of half a megawatt being erected in Laois.

However they did so in direct opposition to county hall who told them it would make no difference. Laois’ County Manager Peter Carey repeatedly warned the council’s monthly meeting the motion would have no bearing on planning decisions.

Cllr Padraig Fleming submitted a redrafted motion stating: ‘That no wind turbine in excess of half a megawatt be erected in county Laois from now on’. But, Mr Carey stressed that the planning process is an executive function and it is the constitutional right of any individual to make a planning application,

Responding, Cllr Fleming said while this may be the legal position, “this doesn’t mean we can’t try and change it”.

“Legislation can be changed. It needs to be made clear that big companies aren’t just welcomed with open arms,” he said.

He highlighted the social cost of developing wind farms in the midlands including the issue of noise, shadow flicker and the loss of value to properties.

“It will affect a lot of our amenities and will have a visual impact on our landscape,” he said of large wind turbine developments.

“Ireland’s first priority should be to harness the wind through wind farms at sea level.That’s where the wind is the strongest,” said the Fianna Fáil councillor.

He questioned the logic of developing wind farms in an inland county such as Laois and said if these wind farms weren’t developed inland, then there would be no need to develop such large turbines.

The wind turbines off the N7 in Tipperary were described as a “monstrosity” and a “disaster” by Cllr Brendan Phelan. He added that these turbines have a large red light on them that are flashing “morning, noon and night”.

Proposals to develop wind farms in communities had caused a high level of “worry and anxiety” Cllr Catherine Fitzgerald, Fianna Fáil, said. While the law has to be recognised, Cllr James Daly, of Fine Gael, said the “power of the people”, also had to be accepted.

Cllr Ben Brennan, Independent, said a cost analysis study should be carried out and he questioned the logic of developing turbines so far inland.