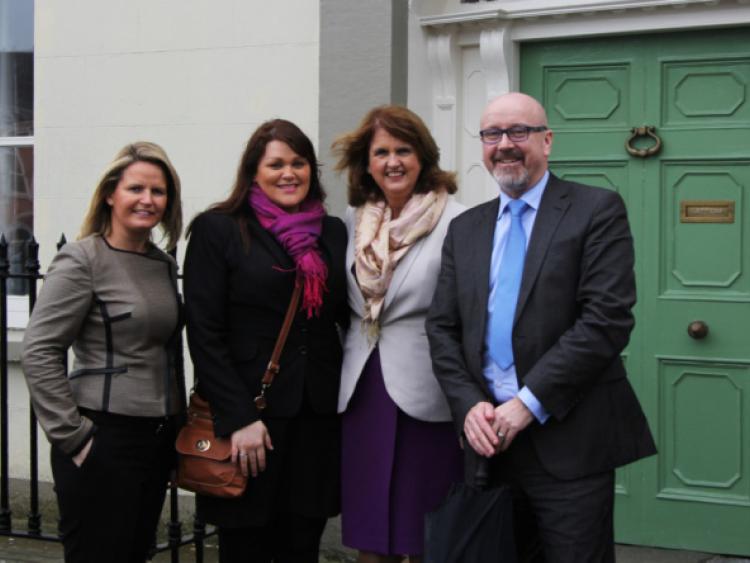 Minister Joan Burton has agreed that the local election is a challenge, given a drop in support for Labour, but is hoping Senator John Whelan will help sway Laois voters.

Minister Joan Burton has agreed that the local election is a challenge, given a drop in support for Labour, but is hoping Senator John Whelan will help sway Laois voters.

“The local elections and the European elections are a challenge, but here in Laois and in those areas where we have TDs or senators, the important thing is to get out and campaign,” she said to the Leinster Express.

The Labour government minister spent all last Wednesday April 2 in Laois to launch the election campaign for their three hopefuls.

All first time election campaigners, the candidates are Noel Tuohy from Portlaoise, Grainne Corcoran, Portarlington, and Mountmellick’s Cllr Lisa Delaney, 28, who was chosen to replace the late county and town councillor Pat Bowe one year ago.

In Portarlington, she took a tour of the primary care centre and Saoirse Care charity shop, meeting disability support groups.

Then it was over to Mountmellick to see the Arts Centre, the Laois Hospice charity shop which employs TÚS workers, and two projects funded by her department in Mountmellick Development Association’s HQ.

“Feedback was extremely positive from the moment I arrived in the square in Portlaoise, from people on the street and at events. The labour party candidates are campaigning extremely hard, they are very rooted in their communities, it is about serving their local community,” she said, before launching the campaign of Cllr Delaney.

“I can tell you Lisa is a first class highly qualified candidate. She is the kind of person people often ask why we can’t attract to politices. She will deliver what she can for the people of the area. She brings lots of energy, creativity and commitment. I am awestruck by the number of committees she is on,” she said.

Lisa is parliamentary assistant to Laois Senator John Whelan, who had a rallying call for her supporters.

“She is up against people that have been on the council twenty or thirty years, It’s time to give a young woman a chance. She will not get elected unless everyone brings in 20 votes for her,” he said.

Also visiting Laois was Senator Lorraine Higgins, a 34 year old solicitor from Athenry, who is Labour’s European election candidate for the Midlands North West constituency of 15 counties including Laois.