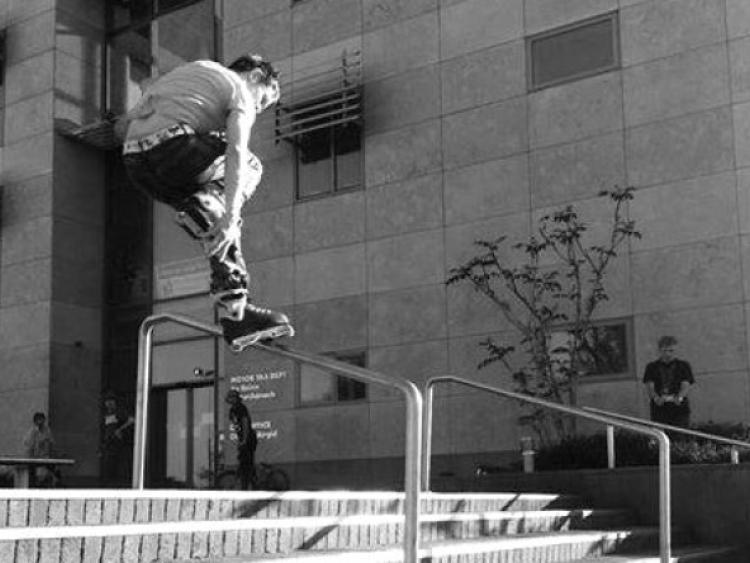 Portlaoise skaters who want to turn the Civic Plaza into a skateboard area got 1,200 signatures in less than two weeks in support of their cause.

Portlaoise skaters who want to turn the Civic Plaza into a skateboard area got 1,200 signatures in less than two weeks in support of their cause.

In their proposal to the council, which Cllr Noel Tuohy read out at last week’s council meeting, the teenagers aged between 13 and 21 said the civic plaza was not being used for anything.

He said they had compiled the 1200 signatures and 95 e-mails in less than two weeks.

They offered to sweep glass from the plaza and gather the rubbish up.

The teenagers said the plaza was well lit and was open at no extra cost, it was monitored by CCTV and the guards were close by.

The enterprising young people also said that “local shops would thrive” as money would be spent locally.

They said the area was safe for the skateboarders as there was no risk to them from traffic and also said it would “look good for the councillors.”

Two of the young people were in the council chambers to hear the issue being debated.

Cllr Caroline Dwane Stanley said she supported the whole initiative, but didn’t think Civic Plaza was the right place for a skateboard park.

“I’m not sure if Civic Plaza is the right place. I believe it should be a designated area. They are a great bunch of kids and it’s great to see this kind of initiative,” she said.

Cllr Dwane-Stanley also pointed out to the meeting that there was equipment in storage.

She asked the council to look at Fitzmaurice Place as an alternative.

Cllr Willie Aird said the skatepark had been moved three times and the last time they put the equipment into storage.

“It’s unfair, it wouldn’t have happened to any other group. Unless we do something today, the equipment will still be in storage this day 12 months,” he said.

Cllr Mary Sweeney was also supportive of the motion.

“We should run with this and provide a skatepark for these young people.

She continued: “We are all familiar with the group of young people involved. They are very enthusiastic and it is interesting to look at,” she said.

Meanwhile Cllr Brendan Phelan said it wouldn’t take a lot of planning to change the plaza.

Cllr Tuohy pointed out that the equipment would be needed, otherwise it was like “sending out the Portlaoise Senior Football team with new jerseys and no ball”.

He suggested allowing the skateboarders to use the plaza on a trial basis for six months.

“It’s easy to say we’ll find another place, but this is going on for eight years now.”

Cllr Willie Aird said he would second Cllr Tuohy’s proposal to use the plaza, so the council executive would have to come back with a response next month.