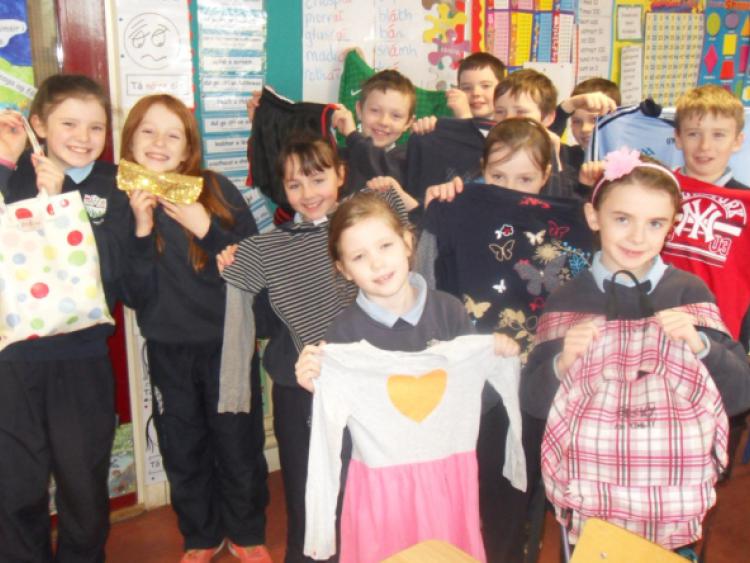 It was all about the wearing of the green last week, but students of Clonaghadoo NS are experts in green clothes, of the environmental kind.

It was all about the wearing of the green last week, but students of Clonaghadoo NS are experts in green clothes, of the environmental kind.

Fifth and sixth class boys and girls have entered the new One Good Idea competition held by the Sustainable Energy Authority of Ireland (SEAI).

Led by the school’s ‘Green Team’, students focused on greener fashions, having just learned to sew with principal Goretti Whelan.

They started with research into the fashion industry, learning some shocking facts.

“Rayon is a popular manmade material but it begins aas woodchip, which leads to deforestation. It takes a fifth of a pound of pesticides to make one cotton t-shirt, and conventional silk is made by boiling cocoons, killing the moth inside,”said teacher Suzanne Doran, adding that airmiles for imported clothes add to climate change.

With their name ‘Ecofashion Recycling Passion’ the kids set about making an ‘awareness clothesline of facts.

The y collected old clothing and made a game of dressing cardboard cutouts, and organised a ‘Clothes Swap’ in the school, to reuse good clothes that were too small.

Putting their sewing skills to use, they collected old clothes, buttons and hair bobbins, and made decorative cushions, soft toys, draught excluders and travel pillows.

“The next part is to create a video and explain our campaign, a sort of a ‘dragon’s den’ vidoe. Our ‘one good idea’ is to create new things from old. The children have been fantastic, they keep buttons to reuse, or if they rip a favourite shirt, they know they can give it new life. They have mor erespect for what goes into making clothes now. They are not just trend driven,” said Ms Doran.

The school hope they will be one of six nationwide to be chosen for the final in May, when finalists will have to pitch their ideas on stage to judges, with prizes for themselves and their school.

Clonaghadoo NS already have three green flags, working for a fourth for travel.