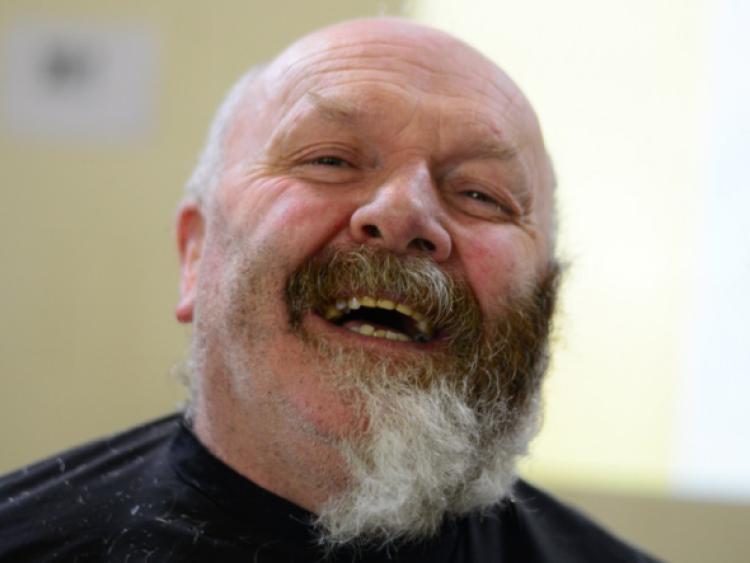 A native of the Kerry gaeltacht, the Irish teacher took the decision to do a beard and headshave before his retirement last week, after 34 years teaching in Portarlington.

The money will go towards Console, the suicide helpline charity supported by the school’s Amber Flag team.

“I always wanted to do something for charity. I am very grateful to the community and the students for their support,” he said.

The shave was organised by fifth year students. Local barber Peter McEvoy did the honours, with help from student Carla Maher.

Principal Seamus Bennett had words of support for his colleague, while student Naomi Kerry was MC on the day assisted by team mates Aoife Geoghegan and Catriona Gallagher.

It was part of many mental health events held in the school by the Amber Flag team recently, including an awareness day. The group proudly raised their Amber Flag for their work in promoting positive mental health.

Seamus grew out his beard even longer in the run-up to the shave, but doesn’t plan on staying clean shaven for long.

“My wife never knew me without a beard, and my children prefer a big beard so it is growing back,” he said.

He intends to keep on teaching Irish in the Port community.

“I won’t go away from it, I might work in an advisory capacity,” said Seamus, who will now have more time for his other great love, GAA.

“I am very involved locally, there is great camaraderie with it,” he said.