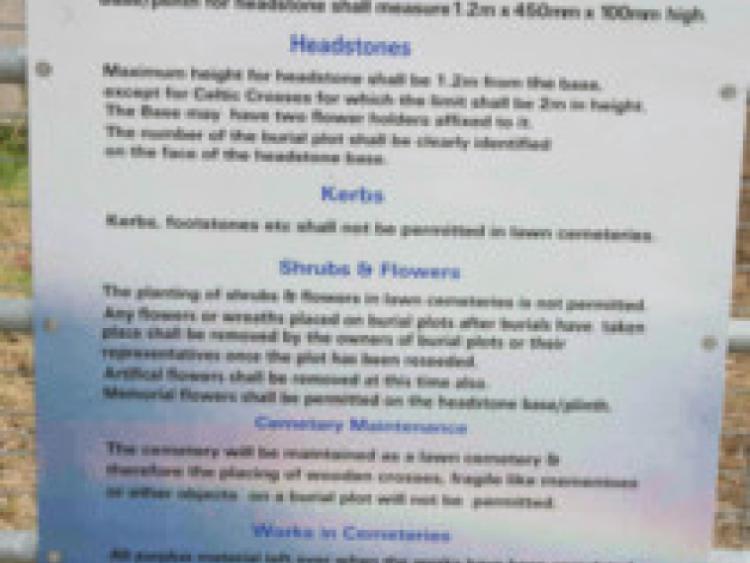 strict rules banning the placing of flowers on graves in the new section of Portarlington’s cemetery have caused a distressed outcry from grieving relatives.

strict rules banning the placing of flowers on graves in the new section of Portarlington’s cemetery have caused a distressed outcry from grieving relatives.

The newly opened extension to St Michael’s Cemetery features a lawn cemetery with rows of gravestones without kerbing. There are also restrictions on headstone sizes.

However the list of rules, posted on a large sign beside the graves last week, has caused upset. They state that wreaths and flowers are to be removed three weeks after burial. Flowers may be placed into fixed holders on a gravestone once it is erected, but nothing must be left or planted on the grave itself, to allow for grasscutting by the cemetery committee.

Michelle Christle laid her mother Elizabeth Dunne to rest in the cemetery a fortnight ago. She was distraught to be told the rules afterwards.

“When we bought the plot we were not told, this has caused us immense grief. It was only when I went up to remove some wreaths that were frostbitten that a lady approached and told us to read the sign. If we had known, we would have tried to find an alternative plot. I promised my mother I would always maintain her grave. She was a florist before she married. She was so particular about keeping my grandparents’ grave tidy and well looked after,” she said.

She said that temporary wooden crosses are not allowed either, so graves will remain unmarked until a permanent stone can be erected.

“What about families under pressure for money, they won’t know where their dead lie. This will look like a field of unknown soldiers,” she said.

Michelle is angered that a ride-on lawnmower will pass over where her mother lies.

“We were reared not to step on graves, and if we did, to apologise. It kills me that they are going to run over her,” she said.

She says the cemetery committee have offered to avoid their plot, so they can cut it individually with a clippers, but is unsatisfied with this solution.

“I doubt they are going to go around,” she said.

Michelle is also upset that each gravestone now has to be clearly marked on the front with a number.

“That is absolutely disgusting, the dead should be honoured not numbered,” she said.

“Three weeks to the day we were telephoned to say everything was to be removed, mememtos and flowers, and a noticeboard was put up on a gate facing my mother. I think it is absolutely disgraceful. I have flowers in a vase there, and ornaments from her grandchildren. I found my mother dead, I can’t sleep now, her birthday is coming, we will want to put flowers there and we can’t, it’s just not right. If we bought the plot, surely it’s our land,” she said.

“What are we supposed to do with the things we’ve bought? I have a battery operated candle burning there, I don’t want to remove it.

“Are we going to be allowed put up a Christmas wreath?” she said.

Tracy is also upset about the prospect of grasscutting over the graves.

“I just want a surround so a lawnmower won’t go over my mother’s grave. Where do we stand? All our lives we were told don’t stand on a grave. The kids want to leave things down for her,” she said.

The easily maintained style of cemetery is already in place in Mountmellick and Killenard.