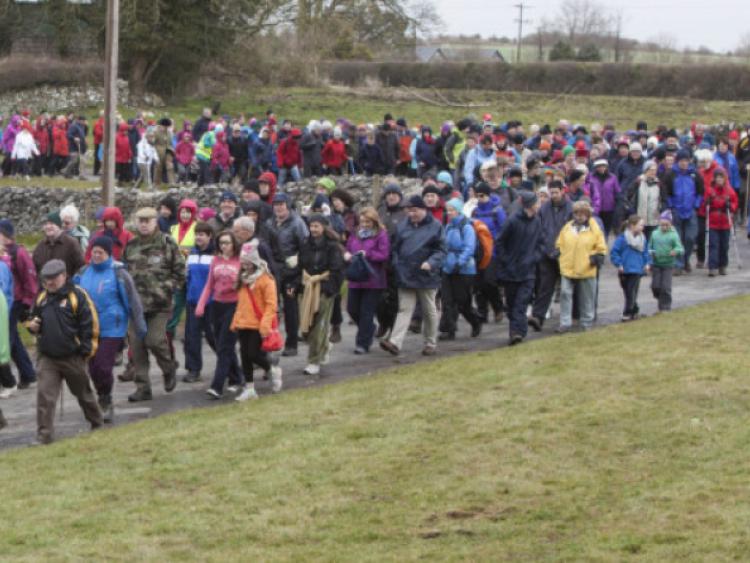 Cullohill in south Laois is set for a massive tourism boost in the coming weeks, as it features on national TV and radio.

Cullohill in south Laois is set for a massive tourism boost in the coming weeks, as it features on national TV and radio.

While it rained on Sunday morning, the weather cleared as over 1,400 walkers from around Ireland converged in the village to set off on a 8.5km hike up and around a breezy Cullohill mountain.

“There was a storm on top of the mountain, but it was all dry underfoot, it was a grand clear day, John Murray was very taken by the views,” said Michael G Phelan who had invited the radio show’s popular walking club to visit.

The walk was interspersed with live music by Trudi Lalor, Adela and the Meanits, The Kilkennys, Camross Comhaltas and singer John Collier.

Laois celebrities Darina Allen and Bernard O’Shea were among those chatting to John Murray, along with storyteller Michael Creagh, national handball champion Niamh Dunne, Harps players the Mahony sisters and the last remaining resident on the mountain, Breda Dunphy.

Nationwide presenter Anne Cassin and her TV crew also spent the day chatting with locals and walkers, while filming the event for broadcast next  Wednesday, April 24.

AFterwards walkers enjoying the refreshments laid on by local clubs and volunteers in Cullohill community centre, while Darina Allen’s brother’s pub O’Connells was said to be “packed out like it was Christmas”.

The day was a huge success acording to Michael G, who also took the opportunity to launch two new trails and tourism brochures for the region.

“Thanks to everybody who worked as a community, it was a huge success. Everybody from the hall committee, the ICA, the civil defence and volunteers, all put their shoulders to the wheel, People told us they didn’t realise the mountain was even there, with all its walks marked out, but they all know where it is now,” he said.

The walk will be broadcast on the John Murray Show tomorrow morning (Wednesday) on RTE Radio 1.