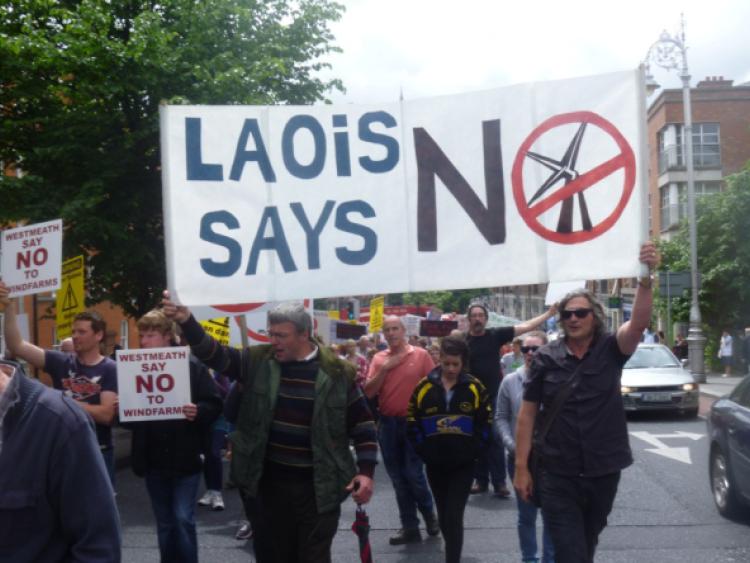 There was “palpable anger and incredulity” amongst the crowd of between 1,000 and 2,000 protesters who travelled to Dublin Castle last Friday June 21 to voice their opposition to the 2,000 gigantic wind turbines planned for the midlands.

There was “palpable anger and incredulity” amongst the crowd of between 1,000 and 2,000 protesters who travelled to Dublin Castle last Friday June 21 to voice their opposition to the 2,000 gigantic wind turbines planned for the midlands.

The marchers, young and old, included community groups from around Laois, as well as Senator John Whelan.

With their colourful banners and signs they set off from Christchurch Cathedral and walked to Dublin Castle, where an EU conference on renewable energy was taking place, attended by An Taoiseach Enda Kenny, and Labour party Minister for Energy Pat Rabbitte.

“He accepted the list of key concerns presented on behalf of the Midland Alliance Group and the concerns about the conflict of interests issue with Brendan Halligan in his duel roles as head of SEAI and being on the board of Mainstream Renewables. Mr Colreavy has committed to raise this issue with the Minister, Pat Rabbitte. He also took some LWEAG leaflets with him in to the conference,” said Ray Conroy.

The protest was organized by the Midlands Alliance Group comprising community groups from Laois, Offaly and Westmeath.

Their concerns include the high number of turbines proposed, their height at 185 metres, taller than any on the British Isles, and the current outdated guidelines.

“It was a civilized and passionate rally attended by decent country people who are abhorred at the prospect that their communities are considered as being suitable locations to site industrial wind farms,” said Henry Fingleton of People Over Wind.

“Children, teenagers, young adults, the middle aged and those of more mature years were marching in support of this issue,” he said.

He has written to complain to RTÉ about their lack of coverage, unlike TV3 and TG4.

“On the same day a story about a child falling from a building in China and coming to no harm was reported. This is immensely frustrating when viewed against the huge voluntary community effort it takes to get 1500 people into Dublin on a Friday morning.

Inappropriately planned wind farms supported by government policy and particularly by your own boss, Pat Rabbitte, is a very real and contentious issue in most counties in Ireland,” he wrote.

Up to yesterday he had received no response.