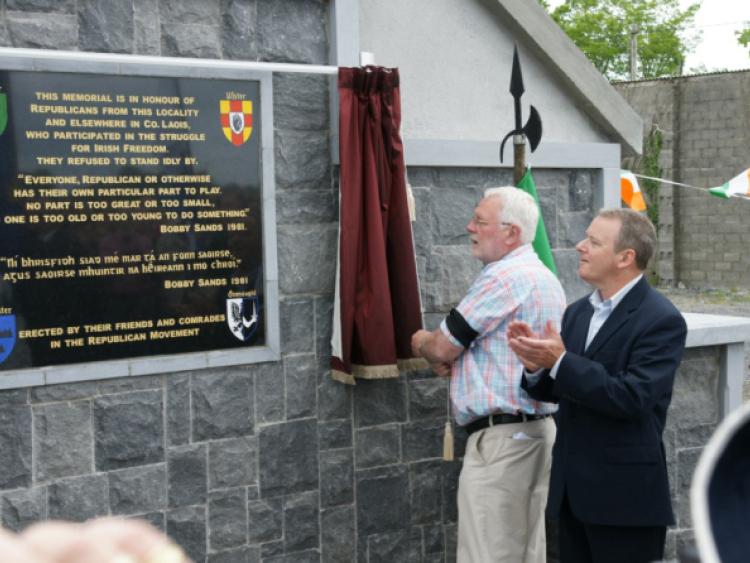 A monument to Laois Republicans was recently unveiled at the site of a well known figure within the movement.

A monument to Laois Republicans was recently unveiled at the site of a well known figure within the movement.

Over 400 people attended the unveiling of the monument and paraded with a pipe band from the Heath Church to the new memorial erected at the site of the late Jim Hyland’s thatched cottage in the Heath.

Jim, a highly regarded figure in the Republican movement, died tragically at this site some five years ago.

The monument was unveiled by Martin Ferris, Kerry TD, former hunger striker and Republican prisoner and Brian Stanley, Sinn Féin TD for Laois/Offaly. Wreaths were laid at the monument, in tribute to all local volunteers who had fought for Irish freedom.

Speaking to the gathering Deputy Brian Stanley said: “This monument is to honour Republicans throughout Laois who worked or contributed in any way to the struggle for Irish freedom over the past 40 years.”

He continued: “They did so, not for any gain or status, but out of a sense of duty and solidarity with their fellow citizens. A 32 county Republic based on social justice was their only aim and they were instrumental in moving that agenda forward.”

Deputy Stanley said that the fact that Laois Republicans “en bloc” had fully backed and supported the peace process is proof of their commitment to bring peace about.

In conclusion Dep Stanley said: “Monuments are important symbols to commemorate and celebrate the efforts made by people and their achievements, but the most important task for Republicans and the people of this island is to achieve sovereignty, North and South.”

Dep Stanley told the gathering that without sovereignty, the State does not have the freedom and autonomy to build a fair and equal society for all.