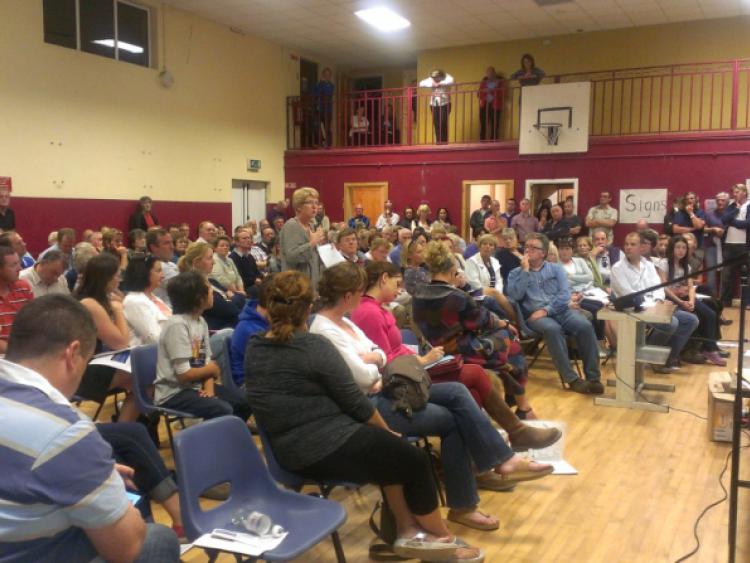 Up to 150 people packed into Ballyroan Community Hall last Tuesday to form a unified stance against an 18 turbine windfarm planned by Coillte.

Up to 150 people packed into Ballyroan Community Hall last Tuesday to form a unified stance against an 18 turbine windfarm planned by Coillte.

“It is the Government’s policy to cluster windfarms. If Coillte gets a go-ahead, it opens the door for other companies to go in.

“We believe 100 percent we can stop them, and if we do, we can stop anyone else,” he said to applause.

He says there are 14 houses within 700m of the proposed turbines, and 47 within a kilometre.

In Spink where Gaeltech has applied for an 8 turbine farm, there are 27 homes within one kilometre.

“There needs to be a cost benefit analysis, to see if we are getting value for money. We want a moratorium pending that and revised regulations,” he said.

He said there were two weeks left to trawl through Coillte’s 1,400 page application in order to submit objections to Laois County Council’s planning department by September 12.

Paula Byrne estimated a nine month planning battle. She laid out ways people could help, by taking on submissions individually, providing local knowledge of nature or of previous planning decisions.

There were protest signs for sale, collection buckets and standing order forms to help with costs of fighting the plans.

A petition was filled out by the audience to argue that a ‘technical summary’ in Coillte’s application was too difficult to understand, and therefore a denial of rights.

One Spink mother said her house would be facing a turbine 620 metres away.

“My family will be living under that. I can’t believe I will have to spend nine months battling,

“I feel we are wasting time lobbying politicians, our homes will be worthless,” she said.

Another Cullenagh man said he was “looking down the barrel” of moving home.

“We are seeing people in Cork having to move out, their kids cannot sleep,” he said.

Political speakers included Fine Gael TD Charlie Flanagan, who said he is making Minister Pat Rabbitte and his party aware of concerns, and has asked Coillte to withdraw their application until new guidelines are in place.

Cllrs Padraig Fleming, Mary Sweeney and Catherine all pledged to vote for guideline updates to the county development plan.