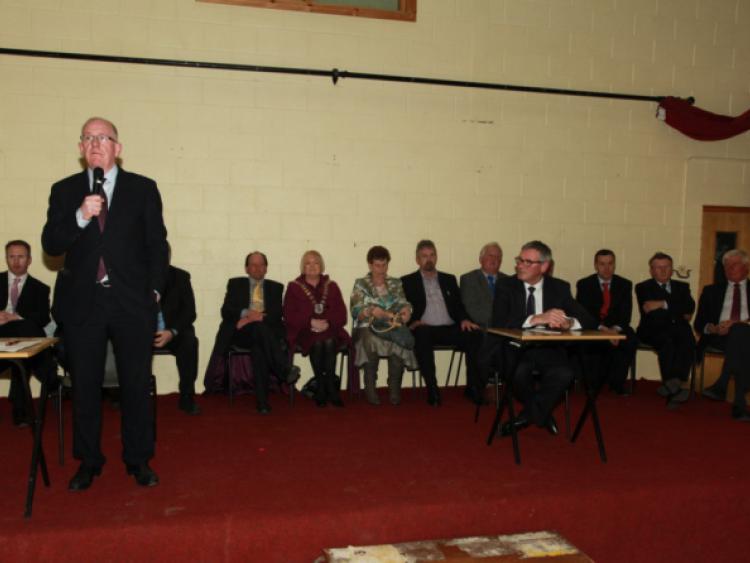 The electorate must not be allowed to lose perspective amidst a temporary political crisis, Minister for Agriculture Simon Coveney told the launch of the Fine Gael local election campaign in Camross last Thursday night.

The electorate must not be allowed to lose perspective amidst a temporary political crisis, Minister for Agriculture Simon Coveney told the launch of the Fine Gael local election campaign in Camross last Thursday night.

The achievements of the past three years and the job done by Government to date was the message to keep in focus, the Minister stressed to a full hall in Camross.

“This Government is not perfect, and we have mishandled some issues. It was a difficult week in government.

“ The broader picture, however, is that we are putting back together the pieces of the jigsaw, three years after the country nearly imploded.

“Mid term elections are difficult for government parties generally. We have a lot to say. Fianna Fail have nothing to say.

“Fine Gael has become a powerful force in Irish politics for all the right reasons,” he stated.

“People who nearly destroyed the country are now lecturing us about standards. “We have to stand up to it,” the Minister told the hall.

“There is no such thing as a safe seat,” he noted. “All elections are difficult.

“A barstool in every pub is occupied by someone’s backside who says they can run the country better.

“Very few of them put their names forward on a ballot paper.”

Mairead McGuinness MEP noted that the party had a good story to tell. “There is a strong sense of stability and and an increased sense of confidence,” she said.

Director of Elections, Senator Pat O’Neill said that the battle in Laois was with Fianna Fail. “The message is we are fixing the country,” he stated.