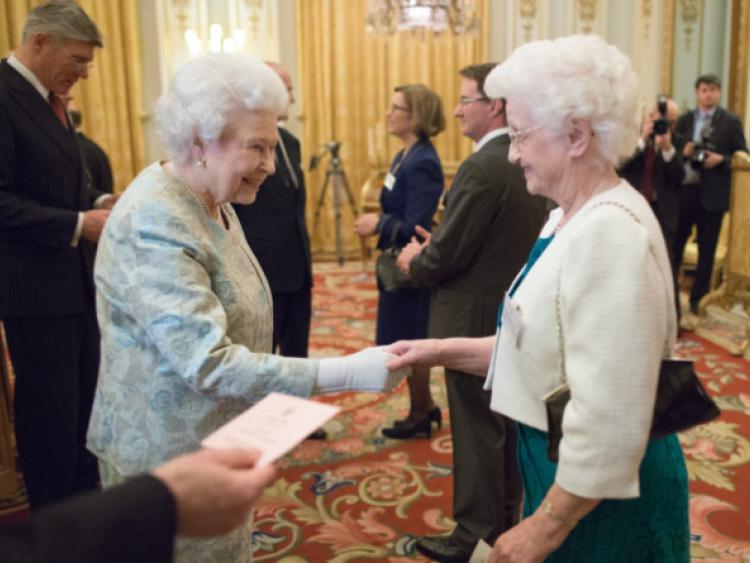 A Clonaslee lady made quite an impression when she met Queen Elizabeth and Prince Philip at last week’s Irish Reception in Buckingham Palace.

A Clonaslee lady made quite an impression when she met Queen Elizabeth and Prince Philip at last week’s Irish Reception in Buckingham Palace.

Alice Kennedy, 77, was first formally introduced to the royals, later speaking to them again as guests mingled at the Ireland Reception.

“Prince Philip asked me if I had had a facelift, the Queen just smiled at me, she was lovely,” said a delighted Alice.

Smartly turned out in a white bolero jacket and green dress, Alice was interviewed for television news on the day.

“It was a great experience,” said Alice, who moved from Shracullen to Kentish Town in north London 52 years ago.

She was invited to attend the historic gathering as chairperson of the Irish Elderly Advice Network in London, who care for older Irish emigrants living alone.

“It is a charity organisation, funded by the Irish government and the Irish in Britain. We get them rehoused. They can be very lonely, very isolated, living in single rooms. I do a lot of community work,” Alice said.

She is also secretary of the Irish Pensioners Choir.

“We sing in Travalgar Square every St Patrick’s Day, we have sung with Tommy Fleming and Brian Kennedy, she said.

As well as meeting the Princess Royal Margaret and Vice Admiral Tim Lawrence, the Duke of Gloustershire and Duchess of Kent, she got to chat with Niall Horan of One Direction and Louis Walsh.

“I said to Louis we’ve got a pensioners choir and he said ‘I’ll get you through X Factor’,” she said.

“I met him twice before, when we sang in the Irish Embassy. I lead quite an exciting life,” she laughed.

When she emigrated in 1962, Alice worked in Woolworths for seven years, then in John Lewis on Oxford Street until her retirement. Her husband was Frank Kennedy, now passed away and buried back in Clonaslee.

“My sister also passed away last January. I have another sister Mary Ann Kearney, two brothers in Clonaslee, Chris and Michael Culleton and Seamus in Kilcormac, and nieces and nephews. I keep in touch very much by phone. It’s lovely to go home, but when I go back to Kentish Town it’s like coming home too,” she said.