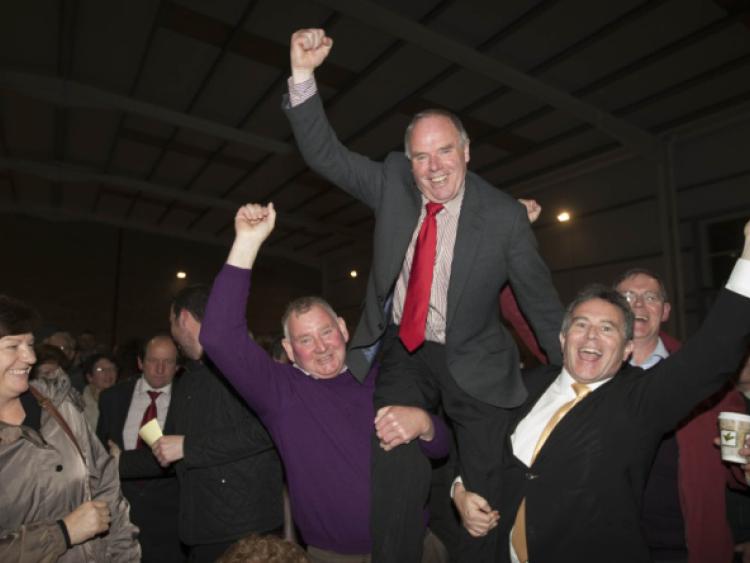 The mayoralty chain has finally buried the last vestiges of the bitter aftermath of the Civil War. And no harm in that!

The mayoralty chain has finally buried the last vestiges of the bitter aftermath of the Civil War. And no harm in that!

Mind you, for a new generation of voters, ground down by austerity created by some of the post-Civil War politicians, ancient conflicts mean little. Economic survival is the name of the game.

The bitterness left by the Civil War haunted the country for decades. It was played out in Leinster House. Bitter and sometimes deeply personal exchanges between FF and FG had their origins in that truly devastating conflict.

It contributed, to some extent, to a largely moribund post-war society. Ireland drifted economically and socially in the aftermath of the Second World War. Matters were so grave in the late 1950s that some social commentators wondered if the country had any future.

Meanwhile, there were those who went on and on and on about the Civil War and the old enemy, Britain. Ireland stagnated and thousands left in the emigrant ship and plane for a better life in England and America and elsewhere. There were some notable exceptions in this self-indulgent descent into social and economic misery. Sean Lemass had no time for talk of past battles, Civil War legacies and the scourge of the ancient enemy. He wanted the country to secure economic freedom and said as much when he took over as Taoiseach in 1959.

But Mr Lemass was one of a small minority. Nevertheless, he went on to lead an economic and social revolution and had pulled Ireland out of the depths of despair by the time he retired in 1966. But the Lemass revolution stalled under some of those who succeeded him. The great hopes and opportunities of Independence were dashed on the altar of incompetence, greed and corruption.

And so, today, in this grim year of 2014, as Ireland battles The Economic War, we find ourselves in what appears to be a rapidly changing political landscape. The council deals done by FF and FG to rotate the mayoralty was something not even to be speculated about up to some years ago. But the old order is changing. The economic crisis alone has concentrated minds.

Could the co-operation seen at council level manifest itself in an FG-FF Coalition in the Dail in the fullness of time? Of course, it could. Politics is essentially a numbers game. And it has been that way for some time.

When Charlie Haughey, in 1989, decided to end FF’s opposition to Coalition, and join in Government with the hated Progressive Democrats, led by Des O’Malley, a political Rubicon was crossed. Charlie Haughey had Des O’Malley expelled from FF in the 1980s for “conduct unbecoming” that august party.

Mr O’Malley’s “crime” was that he had a mind of his own. He even abstained in a vote on legislation introduced by a FG-Labour Government to make contraceptives more freely available. He went on to found the Progressive Democrats with Mary Harney and others. The bitterness between Mr Haughey and himself intensified. This was a political Civil War, with both sides giving no quarter.

Having been expelled from FF for, God help us, his unbecoming conduct, Mr O’Malley said Mr Haughey was unfit for public office. On the morning following the late Brian Lenihan’f operation in the United States, Mr Haughey crossed the Dail chamber to tell the then party leaders of the good news. He ignored Mr O’Malley who sat there as leader of the Progressive Democrats. Relations were that bad.

Events moved on. Mr Haughey called an election in 1989, believing that his then minority Government would win an overall majority.

He had utterly misunderstood the opinion polls, confusing the approval of voters with popularity. Ireland was coming out of recession, and there was a slow but perceptible improvement in the economy. Unlike now, people saw some light at the end of the grim economic tunnel. So there was a general approval of Government policy.

When Mr Haughey called an election nobody really wanted, an angry electorate rounded on the party rather than giving it an overall majority. Political stalemate followed. The numbers suggested that the only Government to secure a Dail majority would be FF and their old enemies, the Progressive Democrats.

But, surely, political pundits thought, that would be an impossibility, given the bitterness, individually and collectively, between the two parties. Some in FF thought the same. Mr Haughey sent TDs out to brief the media that opposition to Coalition was a “core value” that would not be compromised under any circumstances by the Soldiers of Destiny. He was doing no more than playing a waiting game. He did a deal with Mr O’Malley behind his party’s back. His colleagues came on side, given that none of them wanted the alternative, another general election.

So, in time, an FF-FG deal in the Dail if the numbers fall that way? Of course. It would be in the national interest, you will understand!