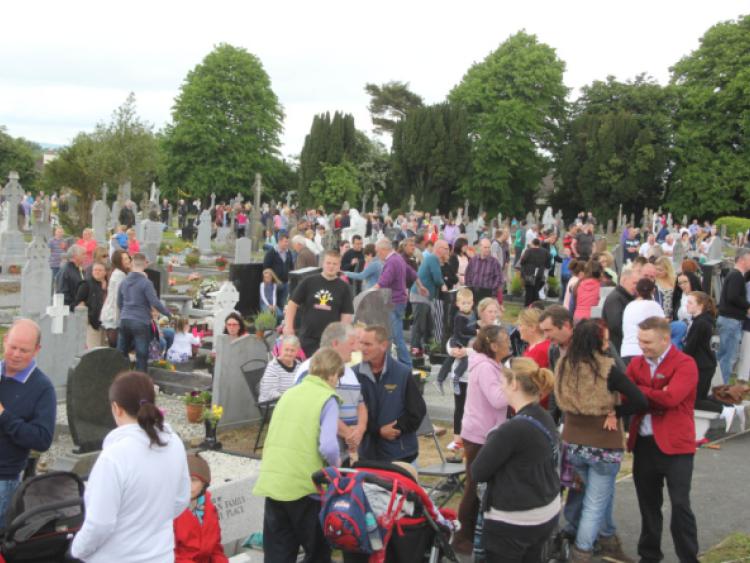 A lot done and more to do. That, echoing a political party, could be the slogan of Portlaoise Cemetery Committee.

A lot done and more to do. That, echoing a political party, could be the slogan of Portlaoise Cemetery Committee.

Though in existence for only a little over a year, the committee has already transformed SS Peter and Paul’s Cemetery with flowers, shrubs, cleaned-up graves, repainted walls, re-gravelled footpaths and a newly-constructed altar.

This was evident at the annual cemetery mass on Sunday, June 1, where the large congregation, led by the local clergy, expressed delight at what had been achieved in the final resting place of thousands of Portlaoise people.

To date, the committee has spend approximately €2,000 on improvements and members and other volunteers put in a special effort to have the cemetery looking particularly well for the annual mass.

Proceeds from the cemetery mass collection go to Portlaoise parish, not to the committee.

The public and businesses have been very generous in their contributions towards the cemetery. Last Christmas, for example, a tree erected in the Kyle Shopping Centre generated much-needed cash, thanks to the initiative of Mary Callinan and the Rotary Club.

Money also came in from the church gate collection in March and, in addition, quite a few individual donations were made. Those wishing to help out can do so through the cemetery committee’s account in Portlaoise Credit Union.

The erection of the altar was a cooperative effort involving the county council, Park Engineering, CS facia and soffit and Terry Swayne. The latter also supplied the wall plaque. All done without charge. Stones for the rockeries came from Pat Swayne. Brendan Deevy created signs and supervised the painting of the walls. Joe Ging was generous with the paint. Generous with machinery were John and Padraig Killeen, KWS and AD Groundworks.

Great assistance came from John Quigley, Martina Bracken and Michael Brennan of the council’s environmental and sanitary section, and also from community scheme workers Joe Green, Joe Walsh and PJ Kelly. Vintner P J Kavanagh facilitated the committee by making a room available for its meetings. Plans are now in place for further improvements to SS Peter and Paul’s Cemetery, including the provision of a fence alongside the new section. To repeat... there’s more to do.