Water charges on top of council rent hikes cause protests 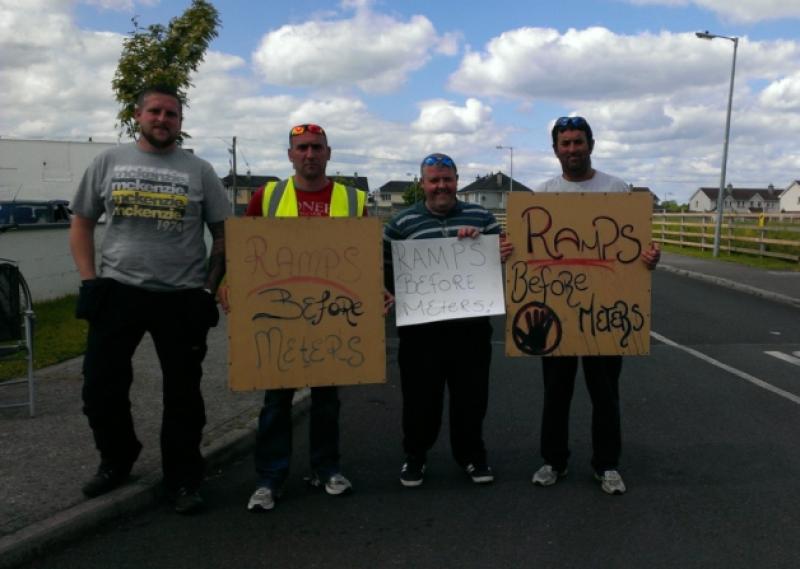 Portlaoise residents stood guard at the entrances to three estates last week in protest at the installation of water meters.

Portlaoise residents stood guard at the entrances to three estates last week in protest at the installation of water meters.

In St Brigid’s Place and Cois na hAbhainn, residents have held vigils for the past fortnight, saying they want speed ramps before meters.

At Cois na hAbhainn on Mill Lane, residents are taking it in turns to sit at the front of their estate with placards, getting beeps of support from passing motorists.

They are angry at being charged for water, on top of a recent increase in rents.

“They are looking for money off people that they don’t have. I have six children, the council increased our rent from €55 to €86.50 a week, now we are facing water charges,” said James O’Callaghan last Thursday June 5.

“I can’t understand why there’s money for meters, but we have no footpaths, nowhere safe for children to play, and no speed ramps,” he said.

“My rent is gone from €37,50 a week to €65, and now we are to pay for water not suitable for drinking. The only green area is behind a wall near the entrance, it is a blind spot for drivers, people turn in so fast it’s ridiculous, I can’t let my four year old son play there,” he said.

They plan to keep their post “for as long as it takes”.

“Everybody here is behind us,” said Mr O’Callaghan.

Last Wednesday at the Woodgrove estate on the Mountrath road, gardaí physically removed a resident off the entrance road, to allow a truck and trailer to drive in.

“They tried to drive through us. The gardaí are supposed to be impartial but we felt we were being intimidated and bullied. Irish Water refused to tell us what chemicals are in the water. The UN says we are entitled to clean, continuous flow of water, free from micro-organisms and chemicals. Our water is not,” said resident Eileen Buggy, who spent several days on vigil from 7am.

“This is substandard water. A lot of us have water softeners but they are not good enough to clean all the lime out of the water. People can’t afford it. They will end up in mortgage arrears. They haven’t even told us what it’s going to cost,” said another resident.

Last Friday, Irish Water officials went from door to door in the estate, and began installing meters at houses where there was no objection.