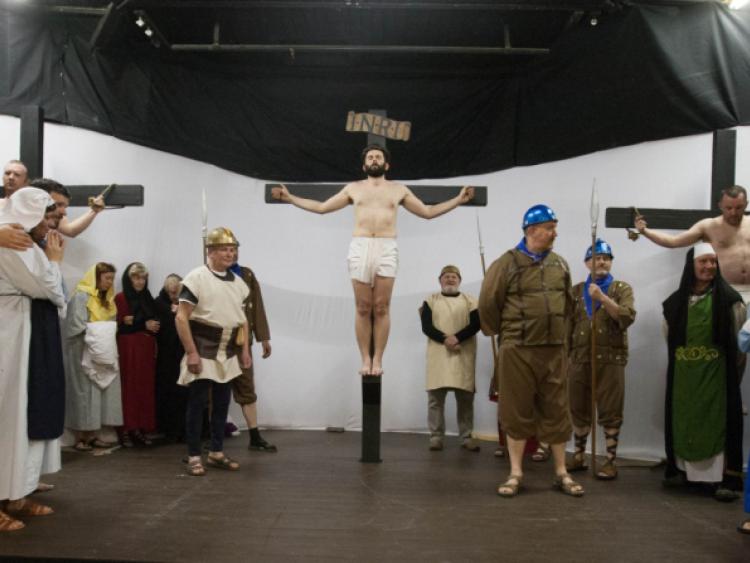 Preparations are being finalised for the sixth staging of the Ballylinan Passion Play.

Preparations are being finalised for the sixth staging of the Ballylinan Passion Play.

The first full dress rehearsal for the play which involves a cast of 120 people in 130 different roles took place last week ahead of the opening night on Friday, April 27.

This year the role of Jesus Christ will be shared between Robert Moran and John Mulhare. While local school teacher Eva Mulhare will take on the role of Mary, along with Margaret Walsh.

The role of Mary Magdalene will be played by Anna Marie McHugh and Veronica Wheatley. Padraig Kaye and Billy Ryan will play the part of Caiaphas, the Jewish High Priest.

“It’s like knitting a jumper, every stitch is important,” secretary, Mary Brennan said.

“Our preparations have gone very well to date. We have some wonderful scenes this year. We’ve upgraded parts of our scenery and stage. We have a big screen this year that we will be testing out during out dress rehearsal to see what we want to do with it.”

Producing the Passion Play is a mammoth task, with preparations beginning last November. There is also up to 50 people involved between back stage and front of house.

“The really impressive side of the play is the community spirit it brings out in people. Our cast and production team come mainly from Ballylinan, but there are a few people from neighbouring parishes such as Ballyadams and Barrowhouse. It’s wonderful to get that many people together,” Mary adds.

Mary says that attending the Passion Play is a very intimate experience.

“Our hall can accommodate 220 people, I know people like going to the big theathres but the intimate experience has its advantages too and we put a lot of effort into projection and sound and special effects.

“Everyone is working very hard at the minute to pull everything together.

“But the whole cast is very good and very committed.”

Bernie continues: “This year, we’ve changed some of the cast around to play different roles to try and keep the play fresh and so far it is proving very good.”

Tickets currently on sale by calling the ticket office on 059 8625125 or by emailing Mary Brennan on mary@npa.ie