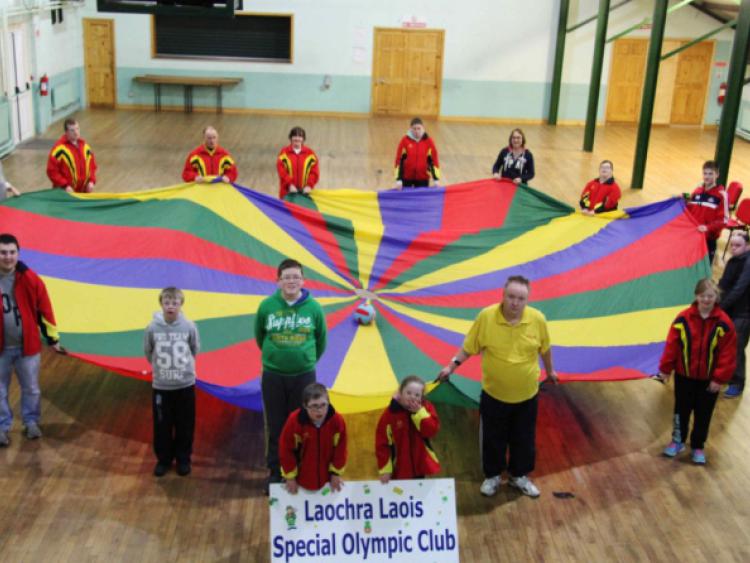 The club has been on the go since 2002, the year before the World Summer Games were held in Ireland.

“Our numbers have dwindled a little over the last few years, so we’re hoping to recruit new members and increase our numbers so the club can remain viable into the future,” Club Secretary, Claire Carroll explains.

“We meet every Monday night in St Mary’s Hall from 7pm to 8pm, it’s a social thing for our members now. It’s an outlet for people with disabilities and a chance to encourage them to exercise, which is very important.

“The athletes who come are responsible for themselves and get a good cardiac workout to their level of ability,” Claire adds.

Coach Stephen O’Toole has been putting the athletes through their paces since the beginning.

He is assisted now by Derek McGinn and Transition Year Volunteers, Colin Sims and Ronan O’Sullivan from St Mary’s CBS.

Derek is also a member of the club who has graduated to assistant coach.

The Monday night training sessions begin with a warm-up for all ages, and the athletes then take it in turns to lead an exercise for the group followed by a game of football or shinty.

At last week’s training session, Stephen was preparing the athletes for the upcoming St Patrick’s Day Parade in Portlaoise, which they participate in every year.

They were practicing with the colourful parachute, taking turns running underneath it and rolling a ball around on top of the parachute, which they hope to be able to show on the day.

The parade will be a special day for Kay Doocey who will celebrate her 21st birthday on St Patrick’s Day.

There is also the opportunity to attend different sporting events, participate in the Athlete Leadership Programme and enjoy a Summer Outing, Christmas Party and Roll and Bowl Trips with the.

Tomás White has been a member since 2002.

“I love it. I’ve been in the club since the start,” he said.

“I like taking part in the parade,” Tomás says, “I love the clapping.”

Tomás is also the athletes representative which means he lets Stephen and the committee know if the rest of the group like the activity or not.

In May, some of the club members will participate in an athletics events in Kilkenny, where they will take part in the track races, long jump and throw ball events.

“Our athletes are training hard for the event in Kilkenny on May 9 and we’re all looking forward to heading down to it and hopefully some of our athletes will improve on their personal bests on the day,” Claire explains.

Club membership open to any child or adult aged eight and over who has a disability.