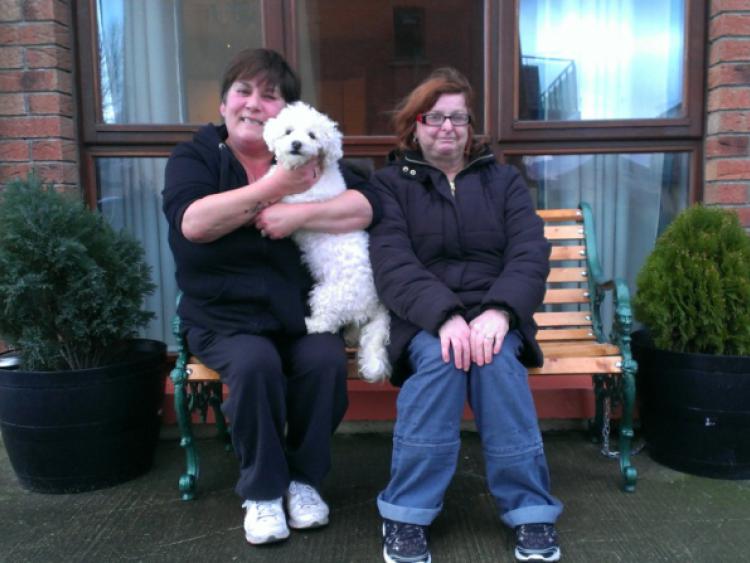 Council tenant Cecelia Finucane is very houseproud of her apartment in Corrig Glen, but her garden bench is chained to the ground.

Council tenant Cecelia Finucane is very houseproud of her apartment in Corrig Glen, but her garden bench is chained to the ground.

“The last one was stolen, they must have needed a trailor, it was cast iron,” she said.

“Sometimes I am afraid, but the biggest problem is people bringing in rubbish, it will bring rats,” she said.

She lives alone in the most populated apartment block, with six residents, and is there for two years.

She worries about strange cars driving in and out, and trespassers in the empty apartments facing her.

“I thought loads of other people would be moving in. It’s a crying shame to see the apartments left empty. If they would just secure them. It couldn’t get any worse, the only thing left to rob is doors and windows,” she said.

Annette Arnott moved in three years ago, also a tenant of Laois County Council, who own 12 apartments.

“It was beautiful when I moved in, the grass was cut, and people were very nice, but it went downhill in a couple of months,” she said.

There are sixty apartment blocks in the unfinished estate, but only 15 percent are occupied.

Most went unsold as the celtic tiger died. A half built block was eventually torn down by the council, but the rest were hit by vandals and thieves.

The worst is block 12, which has 15 apartments, just two of them are lived in.

It is for sale by NAMA for half a million since last year.

Many doors are burst open, windows and internal walls smashed and copper pipes ripped out, kitchens thrashed, black mold on walls and evidence of drug taking, and human excrement on the ground.

From the start he had problems with delays and changes to plans without his approval.

“I should have been more concerned but I felt I was one of the last to buy so I was anxious to get in,” he said.

Instead he ended up living in a near empty block that rapidly deteriorated to squalor.

“The developer never did anything, we never even got a fire cert, our last communication was a demand for extraordinarily high management fees,” he said.

He left in 2013 and now deems it “unsellable”, but continues paying the mortgage, and to add insult to injury, property tax.

“I got a letter from Charlie Flanagan congratulating us that the estate was so bad the household charge was waived. That was my only communication from him. That waiver didn’t even last long,” he said.

“I am paying property tax on the worst estate in Laois. I am completely disgusted, This is hanging over our heads,” he said.