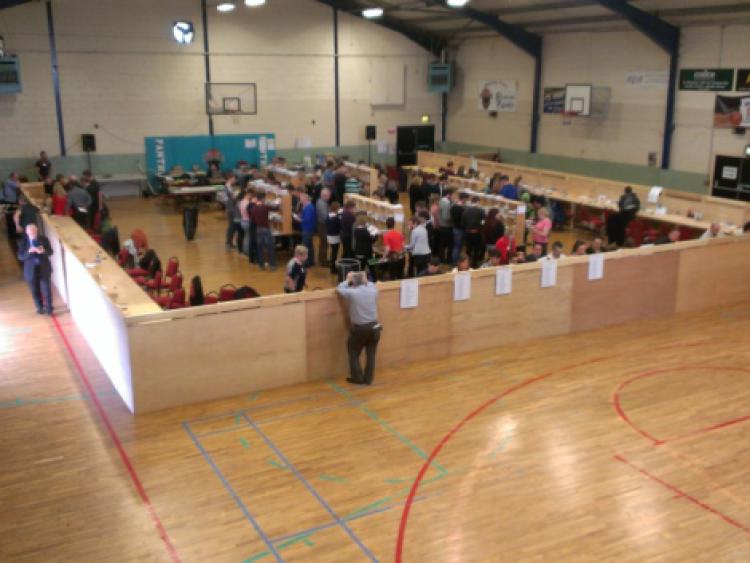 Laois voters may have decisively voted to support marriage equality in Friday’s referendum, but there was little of Dublin’s euphoria at the Portlaoise count centre.

Laois voters may have decisively voted to support marriage equality in Friday’s referendum, but there was little of Dublin’s euphoria at the Portlaoise count centre.

While crowds thronged the count centre at Dublin Castle, by 10am, when Laois boxes had been open an hour at the St Mary’s Hall, there were less than a handful of Yes supporters present.

By the time the result was called just after 5pm – nearly 58 per cent of Laois-Offaly voters in favour of marriage equality - there were less than two dozen people in the hall, mostly members of the Yes Equality civil movement.

Labour Senator John Whelan credited the turnout in part to the 18-25 age group, “who have finally discovered the ballot box.”

“They have now proven to themselves that they can influence the outcomes of elections, of referenda and that they are a powerful force to be reckoned with,” he said.

Sinn Féin TD Brian Stanley said the results are “very much to be welcomed.”

“This is a statement by the people that they want to live in and share a more inclusive society that is based on tolerance, respect and equality,” he said.

Portlaoise man David Delaney, who actively campaigned for the yes side, overjoyed and stunned by the result in Laois and nationally.

“I can’t quite believe it – it’s just not sinking in,” he said, adding that it was a historic day for the country.

Yes campaigners cheered and posed for photographs after the announcement, but the sheer lack of numbers meant there were no party scenes like those broadcast around the world from Dublin.

Fianna Fail were not present at all and only two Laois councillors, Sinn Féin’s Aidan Mullins and Labour’s Noel Tuohy attended.

Just one person was present at 7.30pm to hear how 76 per cent of Laois-Offaly constituents felt presidential candidates should still be at least 35 years of age

That was Donnchadh O’Riordan, a veteran Fine Gael member, who took to the microphone to compliment Returning Officer Paul Fetherstonhaugh’s 80 plus strong counting team for their “courtesy and wonderful, pleasant disposition.”

“I anticipated the political leaders would be here to say thanks,” he said.