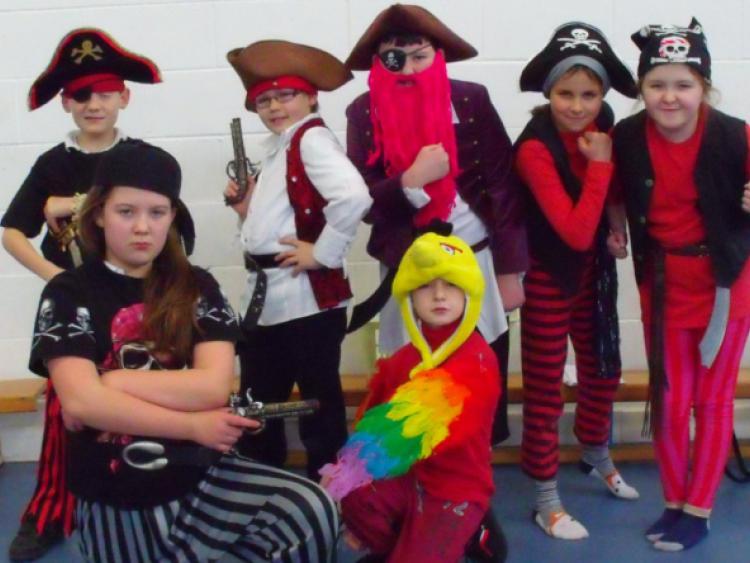 All 38 pupils of Cosby National School staged a fun packed performance of ‘Pirates of the Curry Bean’ in the Dunamaise Theatre recently.

All 38 pupils of Cosby National School staged a fun packed performance of ‘Pirates of the Curry Bean’ in the Dunamaise Theatre recently.

Their panto style show told the tale of two children who find a treasure map, but then have it stolen by the infamous Redbeard and his ‘pungent pirates’ who also kidnap their mother, leading to a race to rescue her and find the treasure.

It is the sixth play for the small Stradbally school to stage in the Dunamaise, undertaken every two years for the past decade.

Every child from Junior Infants to 6th class was involved, either on stage or behind it.

“They helped with set design and costumes and even ad libbed. We find that for children who may not really shine elsewhere, this is their time, they really come into their own. They get a feel of how a real performance happens,” said teacher Jackie Cooper.

The show took place on the morning of Valentine’s Day, and it went down a storm to a packed audience.

“The children all did brilliantly, all the parents said it was the best one yet,” Ms Cooper said.

It was the culmination of over two months of hard work, starting with picking which play to do, by Ms Cooper and principal Daphne Harding with senior room pupils.

Rehearsals began in early December, during and after school, continuing right up to the day before the performance, including two full rehearsal in the Dunamaise Theatre in Portlaoise.

Choreographer Marie Cashin brought the songs to life by teaching the pupils dance routines, while Ms Harding sourced and fitted the costumes.

“We made our own props during art classes and were kept in order by our props manager Lorcan Rooney,” said Ms Cooper.

The school thanks Michelle, Nick and staff of the Dunamaise for facilitating the show and giving expert advice, and David and Jake Bickerdike for recording it.

“Thanks especially to all the pupils for their ideas and input, and for working so hard and so enthusiastically,” added Ms Cooper.