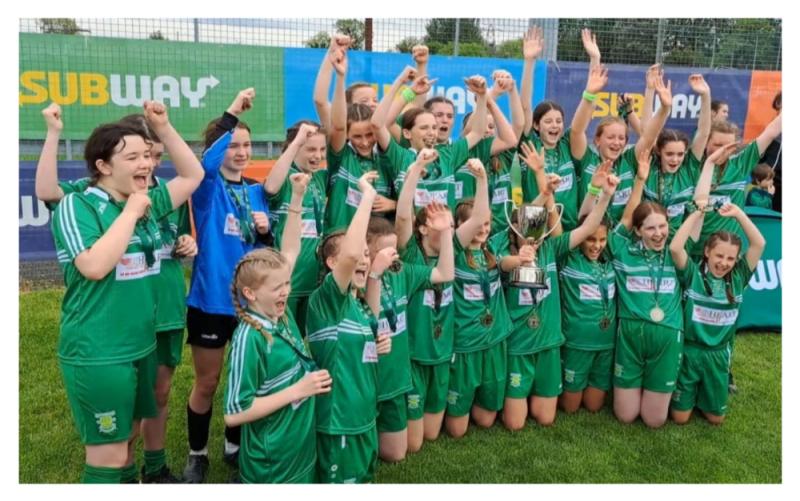 After a long campaign starting last October with some memorable triumphs along the way SFAI Cup Final day was eagerly awaited by the Portlaoise U14 Girls team. They and their large group of traveling supporters arrived at the AUL Grounds in Dublin in good form and in good voice.

Their opponents on the day, Greystones, had their own story which also included some excellent results including a heavy 6-1 defeat of Killavilla in their semi-final. So, the Portlaoise management and team were in no doubt that they had the biggest test of their season in front of them when they lined up.

Portlaoise started in their now familiar 3-4-3 formation, with the ever cool, calm, and collected Doireann Brennan as the last line of defense. Her defenders Holly Murphy, Emily Flynn, and Niamh Dundon have become a great unit as the season has progressed and that defensive strength has been the foundation of several clean sheets on the way to the final. A midfield pairing of Leah Brennan and Emma Francis has been ably supported all year by Aoibheann Bourke and Leah Brophy on the wings. The front 3 for Ciara Breslin, Maisie Kerry, and Sally Morgan have provided Portlaoise with a steady supply of goals throughout the season, given the right supply.

As the first Portlaoise underage team to ever reach a National Final and the first MSL side in 20 years there was a concern that nerves might take hold. Greystones took the kick-off and quickly moved on the attack with a long ball launched forward resulting in a goal kick. Niamh Dundon took the goal kick and the game started to settle down. The opening 10 minutes were very even with neither side creating any clear-cut chances. However, Portlaoise looked like the more dangerous team, with Greystones unable to muster any clear sight of goal. Ciara Breslin was fouled just outside the box. The resulting free-kick hit the wall and broke to Emma Francis who beat one defender before slipping a lovely through ball into Breslin. She finished neatly in the bottom right-hand corner but was unfortunately pulled back for offside.

The Portlaoise attack continued to hound the Greystone's defence making sure that every clearance made was under pressure. This resulted in a lot of territorial advantage for Portlaoise. Play moved down the other end with Greystones winning a free-kick from a dangerous position just outside the box. The freekick found a gap in the wall but was hit straight at Doireann Brennan for an easy save.

The next 10 minutes were more evenly balanced as Greystones tried to get a foothold in the game without threatening the Portlaoise goal. In the swirling breeze, several long balls ran harmlessly through to Doireann Brennan to clean up. Any possession that Greystones managed to pick up was quickly closed down by the hard-working midfield of Portlaoise. However, Portlaoise couldn’t create clear-cut chances themselves.

Strength in depth has been a hallmark of this team all season long and so it proved once again. The introduction of Saoirse Connell-Carroll, and Anna Keegan after 20 minutes of the first half gave the team a bit more of an attacking edge. The breakthrough when it came was not a surprise to the Portlaoise team and management. Niamh Dundon picked up a ball pushed into midfield. She played an excellent through ball that allowed Ciara Breslin to get free of the Greystone's defence. A wicked bounce on the hard ground meant that Breslin still had a lot to do, but she managed to keep her cool as she has done on so many occasions this season. She slipped the ball past the outrushing keeper and had the luxury of wheeling away to celebrate as the ball crossed the line. The roar from the Portlaoise fans would do credit to any cup final.

Portlaoise continued to press with the front three linking up well on a few occasions. Sally Morgan was very unlucky just to be closed out by desperate Greystones defending when she tried to get a shot away. Maisie Kerry’s hard direct running, skill, and passing meant that the Greystone's defence always looked one mistake or slip away from conceding a second. Portlaoise’s next chance was a great end-to-end move. Holly Murphy picked up a loose ball in defence. A pass out to Saoirse Connell-Carroll on the right-wing put Portlaoise on the attack. A quick pass down the line to Ciara Breslin who used her pace to beat her marker and get to the endline. She put in a great cross and Kerry got between two defenders and was very unlucky with a header that skimmed the Greystones crossbar.

A 1-0 halftime score line was the least that Portlaoise deserved. The rotation continued with Keelin Moore coming into the action. The pattern from the first half continued. The Portlaoise defense was clearly on top with Greystones struggling to mount an attack. Captain Holly Murphy was calm and composed and ensured that a good ball was played out from the back whenever the opportunity presented itself. Niamh Dundon and Emily Flynn had their opposing numbers well marshaled. Portlaoise’s passing game set up another good chance with Keelin Moore putting Anna Keegan in the clear on the left-wing. An early ball from her allowed Sally Morgan to drive into the Greystones penalty box before being closed out by their scrambling defence.

The tough windy conditions meant that the game broke up a bit with a lot of ball being put out of play. This allowed Greystones to get a foothold in the game as the pace dropped and resulted in their best spell of the match. They started to get on top in the middle of the field with their key players getting more time on the ball. This allowed them to get on the front foot but barring a couple of free kicks that were well dealt with, they got no nearer to a goal. Portlaoise put together the better passing moves but just couldn’t add to their tally. The best of those chances fell to Anna Keegan whose shot from the edge of the box raised a roar from the crowd but was just the wrong side of the post.

Greystones kept plugging away and a last-ditch tackle from Holly Murphy was needed to prevent a dangerous break. A shot from range was comfortably dealt with by Doireann Brennan. Just as Portlaoise looked to be flagging a little they got back on the front foot and put the game to bed. A ball from halfway by Niamh Dundon to the edge of the penalty area was touched on by Ciara Breslin to Maisie Kerry. She had been unlucky with a couple of chances in the first half, but having rotated back on, she made no mistake in putting Portlaoise 2-0 up. A clinical finish to the bottom left-hand corner. All the Greystones keeper could do was watch the ball nestle in the back of the net.

With 10 minutes to go the game had a real cup final atmosphere that was added to thanks to large traveling support for both teams. Again, fresh legs were added by Portlaoise with Lucy Moran and Elizabeth O’Connor entering the fray to keep Portlaoise on the front foot. However, it was clear there was only going to be one winner.

Greystones continued to press, but with increasing desperation, and were unable to unlock the Portlaoise defence. At the other end, they were lucky to escape a goalmouth scramble that resulted from a Portlaoise corner. The final act in the game was a Greystones long-range effort that Doireann Brennan easily gathered. Her clearing kick brought the full-time whistle from the referee and a huge roar of celebration from the Portlaoise team and supporters.

Every member of the squad has contributed in the run to this cup final and the way they all celebrated shows how tight this group has become over the season. They had some tough matches along the way and continued to improve with each outing. It was an excellent all-around performance today in tough conditions. Greystones gave their best, but the Portlaoise girls never looked under real pressure and were deserving winners.

Portlaoise is U14 Girls SFAI Cup Champions for 2022.

Having added the MSL Cup and MSL League titles to the all-Ireland crown the Portlaoise team has completed a perfect season for 2022. The Portlaoise Management of Dave McCall, Connell Breslin, and Raj Bawa can look back with justifiable pride on a job well done with this group of players. It was a bittersweet scene after the MSL Cup Final presentations when players reflected on their last game together as a group, but they can all look forward to the challenges of next season with real confidence in their abilities and the skills they have learned from this group of coaches.