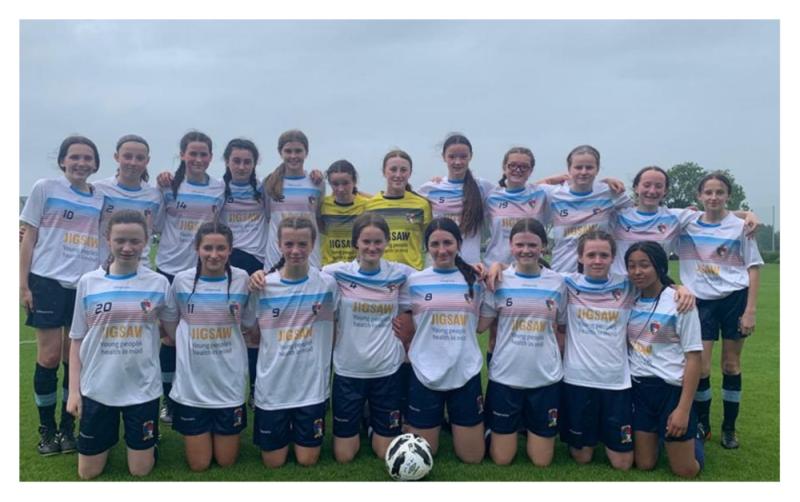 Midlands Girls that were defeated in the Gaynor Cup Final

Midlands fell at the final hurdle in the national Gaynor Cup final as they lost out to a highly fancied MGL South team in Limerick University on Saturday afternoon.

The representative side from the Midlands were by no means outclassed, despite not being one of the pre-tournament favourites.

It was an achievement by the Midlands to be ranked in the top 2 in the tournament and almost win the title for the first time.

Playing with the wind in the first half, Midlands held their own but couldn’t fashion a breakthrough against a strong Dublin outfit.

In that opening 30 minutes, Kayla Lawlor was particularly impressive with central defenders Niamh Dundon and Emily Flynn dealing with everything that came their way.

With chances at a premium, the vital breakthrough came for MGL South just a minute before the break when the ball broke to Anna Butler and she rifled to the roof of the net.

Midlands had failed to deal with a throw-in, a rare lapse in a strong defensive display from them.

Playing into the wind, Midlands went about reducing the deficit and Katie Glynn fired wide from the edge of the box as she looked to build on her three-goal tally from the semi-final.

With several positional tweaks to allow Kayla Lawlor to push forward on the right, Midlands worked hard to get back into the game and with Ava Shine and Ciara Breslin enjoying more possession, they began to enjoy more dominance.

However the reigning champions, MGL South always looked dangerous and they struck for their second goal when Danni Mannion’s shot struck the crossbar and was deemed by the linesman to have crossed the line midway through the second half.

As Midlands pushed forward, they were almost caught on the break only for a brilliant tackle from Niamh Dundon.

The best opportunity fell to Midlands with ten minutes remaining when the increasingly influential Emma Mooney won possession and picked out Kayla Lawlor with a defense-splitting pass. She raced through but her shot was well saved by the MGL South keeper down low at the expense of a corner.

Try as Midlands did, they failed to find a breakthrough, with the closest they went after that was when Katie Glynn delivered a good free-kick into the box, but Michelle Dunne was crowded out as she tried to make space in the penalty area.

While it was a disappointing end to the tournament for the Midlands, it was a fantastic achievement to get down to the final 2 in the tournament, in the country’s premier U14 cup competition.

En route to the final, they had topped a difficult group which contained Galway, North Tipperary, Longford, and Roscommon.

They then defeated Sligo-Leitrim 4-2 in the semi-final but couldn't overcome MGL South, who also won the U13 Gaynor Cup last season.