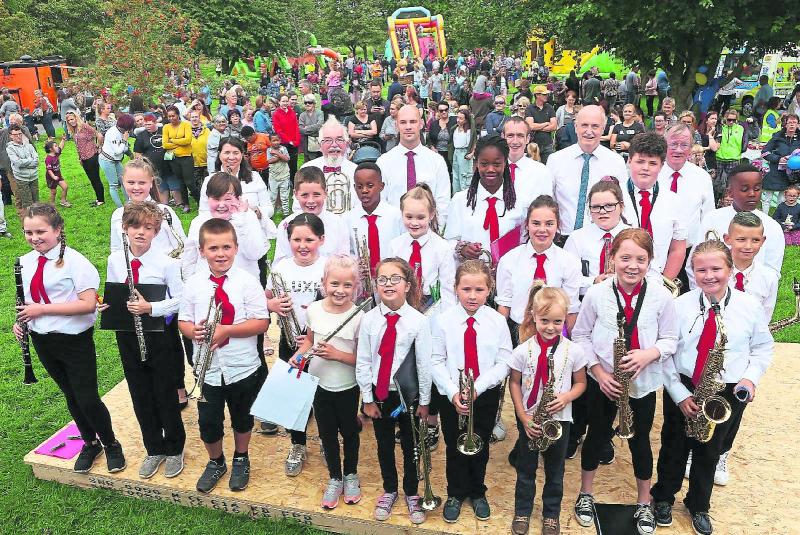 A local musical initiative in Portarlington marks a welcome return to the big stage again for the fist time since Covid-19 silenced live music right around Ireland.

Bandmaster Pat Donnegan leads the Portarlington Concert Band back into action with a big concert at St Michael's Parish Church in the Laois Offaly town next week.

After more than two years keeping the show on the road virtually and in all sorts of other ways, the band will perform at a summer concert at Portarlington Parish Church on Thursday June 23 at 7.30pm.

The concert features there levels of performance. The beginner band features children who have never performed in public. A junior band includes children aged 8 to 12 who have performed publicly. Concluding the line up will be a set of tunes from the senior group which features the top talent.

The band started about four years ago and there are now 60 budding talents signed up. Since they started up to 250 children have taken lessons.

Most of the members children are aged seven upwards. However, some exceptions are made. The youngest member is a boy aged four who Pat says will be playing this week and might be persuaded to play a solo.

The senior group includes a small number adults and children. One of the adults comes from as far away as Lucan in Dublin.

The repertoire ranges from big band tunes, some contemporary compositions to some classical works.

Pat believes the children get 'absolute satisfaction' from learning to play music. He also believes that the parents are delighted that their children have something to do especially during the summer.

Pat says the band was able to continue with tuition during Covid-19. He gave one to one lessons under strict public health protection. However, the group didn't go virtual with Zoom concerts.

Now that all restrictions are lifted, in person full lessons have returned at the The Old Girls School.

It's nearly a full time job for retired Pat, who is voluntary. In truth it's a labour of love for the Portarlington native, has been playing in bands for many years. He performed concert music with bands in Kilkenny, Tullamore, Newbridge and Athlone.
He gave up playing with other bands to focus all its efforts on the local band which is totally independent but is in the gift of Portarlington Parish .

The junior band rehearse on Mondays between 5 -6pm. Pat and Gerry Lacey give lessons the same day and Pat also gives lessons on Tuesdays.

Thursday is the busiest day because there are three tutors giving lessons.

Apart from bringing on the next generation, Pat says tuition is also given to adults. There are six adults enrolled at present including a retired nurse aged 65.

All funds raised will be donated to Portarlington Parish and Fr Tom Dooley, PP, whom Pat is extremely grateful to for allow the band use the former school as the band's rehearsal hub.

Additional inspections for Laois roads ahead of Electric Picnic and Ploughing

Pat says fundraising is not the concert's main aim. He just wants to give the members the opportunity to perform and the community the enjoy.