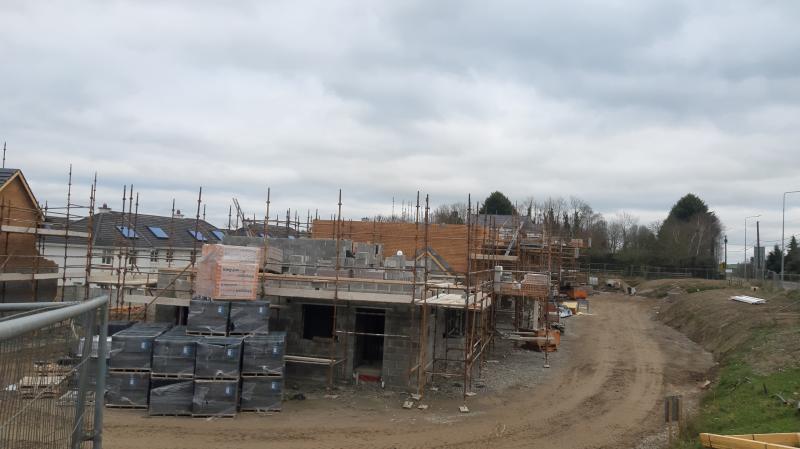 Houses under construction on the Dublin Road in Portlaoise in 2022.

The largest electoral area in Laois recorded the lowest number of house sales according to new research which also reveals that the Portlaoise has the highest sales and prices.

There are three such districts in Laois: Portlaoise, Portarlington Graiguecullen and Mountmellick / Borris-in-Ossory.

The CSO reports that there were 710 sales in Laois in the 12 months studied. At 330 sales, Portlaoise, which includes Abbeyleix and Ballinakill, had the highest number of transactions. The district has the biggest population and while it borders Kilkenny, it is dominated by Portlaoise town.

Second was the Port Graigue district which stretches along the east of the county along the Offaly, Kildare, Carlow and Kilkenny borders. There were 230 sales in the district which includes Stradbally, Timahoe, Ballyadams but is dominated by the two big border towns.

The least busy for sales is the biggest geographic but least populated local electoral area in Laois. There were just 150 sales in the Borris / Mountmellick District in 2019. It borders Offaly, Kilkenny and  Tipperary.

Median income of purchasers is also published. Portlaoise buyers earns about €58,000 annually while the average Port / Graigue buyer is taking home over 12 months is €55,900 on average. The Borris / Mountmellick buyer is on the lowest income earning on average €52,600 a year.

Commenting, Seán O’Connor, Statistician, said the Frontier publication provides further information on the characteristics of individuals purchasing residential property in Ireland in 2019, across the themes of prices, ages, income and counts of dwellings purchased.

"From examining the data presented today it is clear to see the regional variation of the housing market across the State. While Characteristics of Residential Property Purchasers 2010-2019 noted that the proportion of properties purchased jointly stood at 62.2% in 2019 and 75.8% in South Dublin, in Lucan, South Dublin, this share stood at 82.5%.