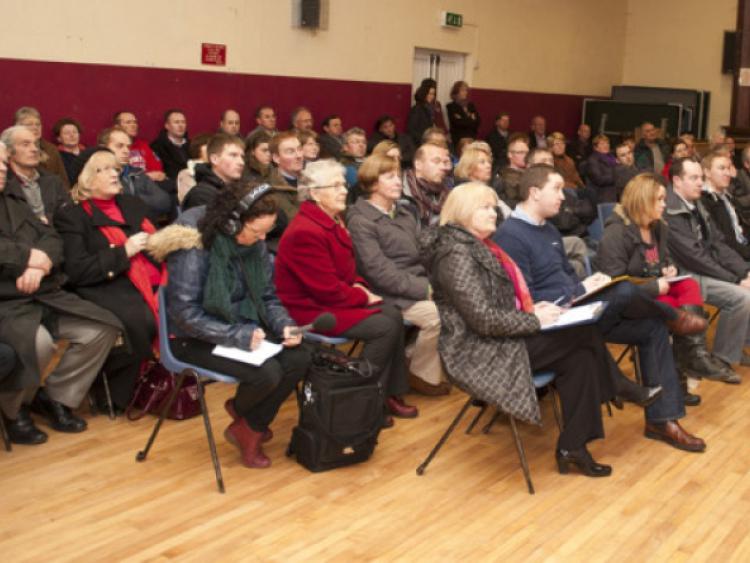 Battlecries were heard in Ballyroan last Monday March 4, when a hundred people gathered in the community hall to hear about plans for massive wind turbines in their area.

Battlecries were heard in Ballyroan last Monday March 4, when a hundred people gathered in the community hall to hear about plans for massive wind turbines in their area.

450 wind turbines are in the pipeline for Laois, as part of a massive 2,300 turbine plan to include Offaly, Kildare, Meath and Westmeath, following the signing of a memorandum of understanding between the Minister for Energy Pat Rabbitte and the UK government last December, to supply renewable electricity to the British grid.

The project is backed by the Irish Farmers Association, Coillte, Bord na Móna, the IDA and the building industry, hailed as an welcome injection of cash and jobs.

The 185 metre turbines will be the highest on land in Britain and Ireland. Many landowners have already signed option agreements to host turbines, receiving on average €25,000 per year for each one, as will Laois County Council. Final decisions will be made by wind companies on what areas are suitable for turbines this summer. They say they will then hold public consultations, before applying for planning approval directly to An Bord Pleanala by the end of the year.

Tighter planning rules on windfarms are to be drafted by the government later this year.

Chairing the meeting, Henry Fingleton said turbines are planned on Cullenagh mountain and around Ballyroan, on Cashel bog, Spink, Timahoe on to the Carlow border and in Vicarstown.

“These companies have been lining up their ducks, signing leases and pitching to politicians and the local authority and businesses. I suspect they see the midlands as a soft touch. As far as they think, this is a done deal,” he said, urging locals to “be angry, get educated, get involved”.

Andy Duncan from the Lakelands Wind Energy Group believes the five counties were chosen because no government minister lives in them.

“Usually when big jobs are promised, they try to drive them into their area, why has this not happened here? We are pawns. The scale and size of these, there is nothing comparable, if they are built 500m from a house, that house is almost unsaleable. You are going to be railroaded if you do not stand up and fight in an aggressive manner,” he said.

Speaker Pat Swords is taking the Irish government to the high court next week for breaching EU environmental legislation.

“This is a bubble, like the property bubble, and they want to get in and ride it, we have a right to access of justice, for sufficient time to be informed. The environment is not the property of the state,” he said.

A letter was read out from Michael Keenan from Roscommon, who has left his house because of noise from a turbine 720 metres away.

“We are unable to sleep, we are devastated, the noise goes from roaring to a vibration, I can’t describe how beaten down we are, a frog or a piece of bog cotton would have more rights,” Mr Keenan wrote.

Colm Fingleton from the Ratheniska Timahoe Spink sub-station action group, said the procedure being followed was similar to that of Eirgrid, who are planning a 17 powerline station in his area.

“You have no say, they dictate the process. Applications (for the sub-station) are gone now into Bord Pleanala, and we have seven weeks to say what we want to say, they’ve had years. This is corporate greed, that all it is, Pat Rabbitte better get that into his head,” he said, to loud applause.