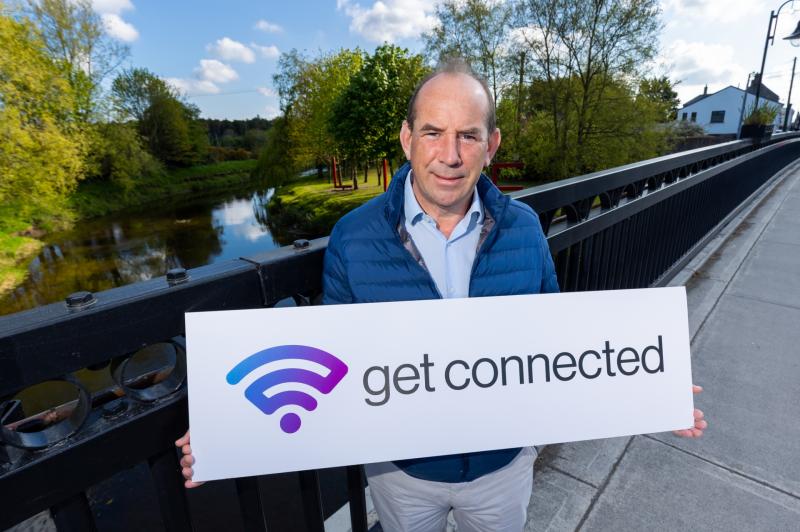 Get Connected, a community initiative run by telecoms infrastructure provider Cellnex, originally heard from several communities around Laois who were struggling with poor mobile phone coverage during the pandemic.

The Get Connected initiative has already been launched in nine counties, and has received multiple submissions from community groups, covering 37 different coverage blackspot locations. Cellnex is actively engaged in the initial locations to address the needs of various stakeholders, including support from the mobile operators to ensure service improvements can be achieved.

Working closely with local communities and local authorities in Laois, Cellnex has recently installed new infrastructure in Ballyfin, Castletown and Vicarstown that has transformed previous blackspots and delivered world-class mobile communications in the target rural areas.

“These pilot schemes show that we have the ability now to fix existing mobile communications blackspots in these rural communities,” said Colin Cunningham, Managing Director of Cellnex Ireland.

“However, given the low population densities, the rollout of these proof-of-concept schemes underscores the fact that without some form of financial support, it will unfortunately not be viable for the industry alone to fix all of these blackspots and deliver the required connectivity to communities. We estimate the total number of blackspots in commercially challenging areas that need to be resolved is in excess of 200,” Mr Cunningham added.

However, each rural location is unique and, in many cases, without external support, the market is not sufficient to support the investment required by both the infrastructure provider and the mobile operators.

“There has been a seismic shift in the mobile communications needs of rural communities recently, as working from home and hybrid working is now the norm,” Mr Cunningham said.

“Ireland’s rural communities should not be left in the second tier of mobile connectivity. Cellnex is committed to playing its part and working closely with local authorities, mobile operators, Government departments and other stakeholders to address this issue. To meet the State’s target of delivering 5G to all populated areas, as set out in its ambitious National Digital Strategy, then we believe some level of funding support will be required. Some of the coverage blackspots can and will be addressed on a commercial basis; but many cannot. The initial pilot projects being delivered under Get Connected have proven that rural communities across the country have a pent-up demand for proper mobile connectivity.”

Cellnex has invested more than €500,000 in the Get Connected initiative since it initially piloted the project in 2021, in an effort to highlight the viability of public and private collaboration for improved connectivity. Laois and Offaly were the first counties where Get Connected was piloted, with the positive responses from communities and Laois County Council serving as the catalyst for the national launch.

Residents and businesses in each of the three locations in Laois now have access to world-class mobile phone and broadband connectivity, all delivered from a modern slim-line pole solution, which is cost effective to deploy in a rural setting  and is less visually obtrusive for the area. The solution being used is a result of a collaboration between Cellnex and local Irish suppliers based in the midlands.

“Connectivity is absolutely vital to local rural economies, and we are delighted to have been able to work with the Get Connected programme and Cellnex to revolutionise the experience in these three villages and their hinterlands,” said Angela McEvoy, Director of Services with Laois County Council.

“Having top class mobile connectivity for businesses and residents in rural areas creates a level playing field with urban locations and will allow more of Laois to become a viable working-from-home location or a better base for hybrid working. This type of investment will allow local rural communities to thrive and will significantly benefit the quality of life for residents, as they won’t necessarily have to commute to large urban centres, given the availability of high-quality mobile connectivity locally.”

In the communities in question, Cellnex has fixed the coverage blackspots by using a series of unobtrusive street-based poles and street cabinets. These are designed to be able to carry services from several mobile companies, which reduces the proliferation of masts in communities and reduces the cost of deployment.

Caroline Hofman, CEO of Laois Chamber which has supported the initiative, said the provision of quality mobile services would deliver a huge boost to three Laois locations.

“Poor mobile coverage and blackspots are something we have all experienced, locally and beyond. Thanks to Get Connected and Cellnex, communities are being empowered to collaborate and work to together to address these issues and find solutions.

The benefits of improved connectivity are wide-ranging for our members and the wider community in Laois. Laois is now one of the best-connected counties in Ireland, and it is fantastic to see this initiative being rolled out nationally.”

Cellnex Ireland launched in 2015, with the acquisition of 300 sites from Irish state forestry company Coillte, and through further acquisitions and investment now has as portfolio of over 1,800 sites.

Cellnex specialises in maximising the efficient use of tower infrastructure through hosting the equipment of multiple operators on its sites, thereby reducing costs for users and reducing the proliferation of unnecessary towers. www.cellnex.ie